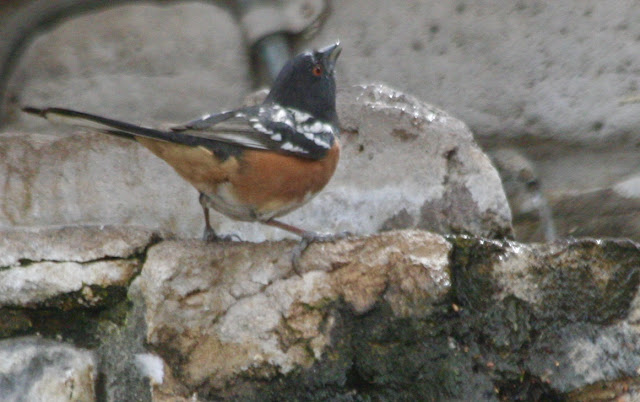 Spotted Towhee having a drink. Photographed at Fort Davis in West Texas.
*~*~*~*
The climate scientists assure us that there is still hope but the projections of the Intergovernmental Panel on Climate Change, reported this week, make clear that we are barreling toward a hot and hellish future on Earth unless we take the necessary steps to prevent it.
*~*~*~*
The country's oldest national park, Yellowstone, has passed its 150th birthday and it is busier and wilder than ever, according to the park's 'winterkeeper.'
*~*~*~*
And here, in celebration of Yellowstone's birthday, is a photo diary of that magical place.
*~*~*~*
California, always a leader in environmental protection, wants to eradicate microplastics and they have come up with a 22-step action plan to try to accomplish that.
*~*~*~*
Here's a bit of good news for the environment: The American Bird Conservancy is touting its success in getting the rodenticide d-CON removed from the market. This occurred in 2015. Rodents poisoned by the pesticide were then eaten by predators who were also poisoned. However, the victory is not complete because it can still be bought in bulk from agricultural supply stores so the fight goes on.
*~*~*~*
Life on Earth without its insects would be much more boring. Here are 10 little-known facts about the critters.
*~*~*~*
In addition to the threat to innocent humans as a result of the Russian invasion of Ukraine, there are twenty endangered species that are at risk because of the fighting.
*~*~*~*
The Interior Least Tern has had a dramatic recovery because of its protection under the Endangered Species Act. Its increased population may soon lead to its delisting, a welcome sign of its recovery.
*~*~*~*
If they have the right kind of tree lions can climb them, but many of them don't. The question is why.
*~*~*~*
The New York Times has a map that shows where biodiversity is most at risk in the country. It is cause for concern.
*~*~*~*
Florida's Key deer population has bounced back from its low a few years ago, primarily because it was given endangered species protection. But the Fish and Wildlife Service has been working on proposals that would strip the deer of those protections, even though the agency's own scientists have highlighted the ongoing threats to the animal's habitat.
*~*~*~*
Here's something that should keep you awake at night: The U.S. Supreme Court is signaling that it may restrict the federal government's ability to address the climate crisis. The court currently has six out of nine justices that are staunchly, some might say rabidly, conservative and who have evinced little concern about the protection of the environment.
*~*~*~*
Elephant seals as spies? In a manner of speaking. Biologists have attached audio recording devices to some of them in order to eavesdrop on other marine life, including sperm whales.
*~*~*~*
A botanist has created a forest with tree species that she has picked specifically because of their ability to withstand a warming climate. It is quite literally a forest planted to endure.
*~*~*~*
Bills currently pending in Congress would give conservation protections to 7,000 miles of rivers and help to safeguard drinking water, biodiversity, and recreation. They represent a historic opportunity for this Congress to act to protect the environment and our children's future.
*~*~*~*
In Hawaii, fences are being built to protect fast-disappearing endangered species such as the Palila and sensitive species like the Laysan Albatross. The fences are meant to help protect the birds from invasive species.
*~*~*~*
A greater reliance on clean energy would be one way to effectively combat Russian incursions.
*~*~*~* 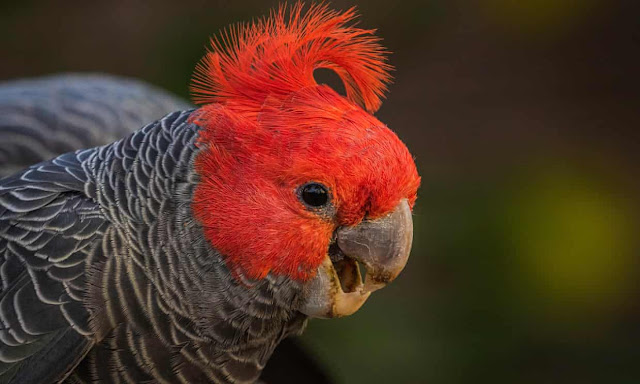 This gaudy fellow is the Gang-gang Cockatoo, common to Canberra's suburbs and the nearby bush reserves. Its numbers have seriously declined because of bushfire disasters and climate change and it is now set to be listed as an endangered species.
*~*~*~*
The southeastern coastal region of Australia has suffered its worst flooding in a decade because of recent torrential rains. Homes have been washed away and power lines cut and thousands of people have had to be evacuated.
*~*~*~*
California's plan to demolish four massive dams has cleared a major hurdle with federal regulators. It is hoped that the destruction of the dams would help to save the imperiled migratory salmon.
*~*~*~*
The American Bird Conservancy, having just passed its 20th anniversary, is taking the opportunity to celebrate some of the victories for the birds that it has won in those twenty years.
weekly roundup