Grimm Up North by David J. Gatward: A review 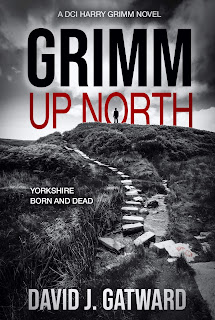 I've been auditioning a few new-to-me mystery series for my reading pleasure and here comes another one. This one is by David J. Gatward, another writer that I had never read, never even heard of as far as I can remember. It features DCI Harry Grimm as its main character and is set in Yorkshire. This is the first book in the series. Gatward writes with a light hand and there is quite a bit of humor in the tale he tells here.

Harry has been a pain in the ass for his boss on the Bristol Major Investigations Team and when he has the opportunity to get Harry out of his hair he takes it, sending him north to a town called Hawes in Wensleydale on secondment. It's a place that is famous for its cheese and its scenery. It's the kind of Yorkshire setting that is so popular with writers of British crime fiction, so this all feels very familiar.

Harry is a city boy and he doesn't know what to make of his new assignment in a more rural location. He expects that his duties will entail searching for lost sheep, directing tourists, and handing out speeding tickets. But soon after he arrives a local teenager runs away from home and the search for her reveals that things may not be as lazy and idyllic up north as Harry has assumed. Moreover, the missing person quickly escalates into something even more sinister and just like that Harry has his hands full.

Harry is an interesting character. For one thing, his face is quite scarred as the result of his encounter with an IED while in the military service. Maybe it is that experience that has helped to make him the grumpy sort that he is. His defense against the world is sarcasm which he wields quite readily. He is also very smart and very good at his job. His character is one of the strengths of the book.

Another thing that I liked about the book was the author's description of the Yorkshire Dales, a beautiful place. I kept seeing images of scenery from the television series "All Creatures Great and Small" and that was not an unpleasant thing.

The book also held some annoyances for me. For example, unnecessary repetition. How often did the author tell us that Harry was in the "Paras" during his military service? I didn't count but it seemed to be on almost every page. I think I could have gotten the idea after just a couple of mentions. The plot was pretty straightforward and didn't hold any real surprises. I guess I've been spoiled by all my reading of Ann Cleeves' mysteries. I'm always expecting red herrings and plot twists. But that was not this book.

Overall, this was a pleasant read. There was not much that was especially memorable about it except for the character of Harry and the Yorkshire setting, but that was enough to hold my interest and I would expect to read more of the series in the future.