The Seven Husbands of Evelyn Hugo by Taylor Jenkins Reid: A review 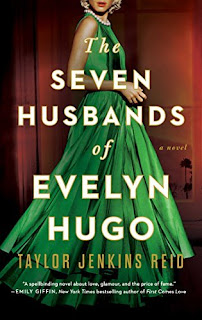 In Daisy Jones and the Six, Taylor Jenkins Reid wrote of a number of very strong women in the rock music field. In The Seven Husbands of Evelyn Hugo, she writes the story of one very strong woman who refused to let society dictate the kind of life she should lead.
Evelyn Hugo became an actress and she was determined to chart her own course in life. She married her first husband to escape the life that she had and then dumped him when she needed to in the furtherance of her career. And that was essentially the pattern that was repeated throughout her seven marriages.
We meet Evelyn when she is at the end of her life. She is 79 and has decided that it is time that her biography is written. To write it, she calls on a fairly unknown journalist named Monica Grant who works for a magazine in Los Angeles called "Vivant." Both Monica and her editor are surprised by the request, but Evelyn has her reasons. Reasons that will only be revealed near the end of this story.
Evelyn Hugo was born Evelyn Elena Herrera, the daughter of Cuban immigrants. She grew up in poverty in New York's Hell's Kitchen but she had one asset: her incredible beauty. That's not quite true. Although her beauty was the main asset, she also had a radiant energy that drew people to her. She was competitive and determined and she saw the road out of her poverty as leading through Hollywood. And so she headed there. She dyed her hair, learned to expose her body on camera while looking at that camera with her beautiful almond-shaped eyes under long lashes and soon she was launched and directors and the camera wanted more. So did all the seven men she married. They all got their money's worth but Evelyn always kept something back, something for herself.
Evelyn's grand passion was not for any of the men she married nor for the career that she fashioned for herself; it was for a woman. But this was Hollywood in the '60s and two women loving each other was not a story that it was willing to tell. Evelyn's life story as she tells it to Monica was not simply one of this forbidden love, however. It is also the story of her own ruthless ambition to be a star and of an enduring friendship that sustained her through all the trials of her life.
Reid expertly captures the atmosphere of Hollywood in the '50s and '60s or at least Hollywood as I imagine it was in the '50s and '60s, a world that thrived on fantasy and giving the audience the story that they wanted regardless of the truth. Thus, the audience was perfectly capable of accepting a woman who serially married seven different men, but would not have been able to accept a woman who through all of those marriages was in love with one woman. The Evelyn that Reid describes used her asset - her beauty and her body - to get what she wanted. She worked in an industry rife with blatant sexism but she was able in some ways to use that. She took the world as she found it and manipulated it to her advantage. It is an engrossing tale on many levels and as Reid tells it, it is a real page-turner.
My rating: 4 of 5 stars
2022 4-star reads 2022 books Taylor Jenkins Reid