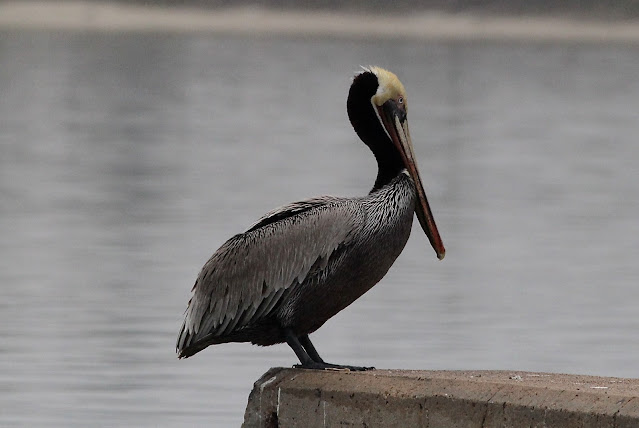 Brown Pelican resting after a swim in Galveston Bay.
*~*~*~*
At least seven wildfires were raging around the defunct Chernobyl nuclear site this week, raising fears of possible radiation leakage. The fires were blamed on the Russian forces that now hold the site.
*~*~*~*
There are heatwaves happening at both the planet's poles. Climate scientists are alarmed that these unprecedented events could signal a faster and more abrupt climate breakdown.
*~*~*~*
While the world's attention is focused on the war between Russia and Ukraine, Brazil's president Bolsonaro is taking advantage of the crisis to try to pass legislation to allow large-scale mining on pristine land that is under the control of Indigenous people.
*~*~*~*
This could be a good thing: Climate change is spurring a movement to build houses that can withstand storms. Building houses that can survive natural disasters sort of seems like a no-brainer, doesn't it?
*~*~*~*
Climate change is a threat to food stocks in sub-Saharan Africa but researchers say that a comprehensive approach to food, farming, and resources could increase crop production by more than 500% in some countries in the region.
*~*~*~*
Unusually high temperatures in Antarctica have caused the entire Conger ice shelf, an area as big as Rome, to collapse.  Record high temperatures were the result of an atmospheric river that trapped heat over the continent. On the opposite end of the Earth, the high temperature could cause the sea ice in the Arctic Sea to reach its maximum point much earlier than normal.
*~*~*~*
Have you ever wondered why our right halves, and the right halves of virtually every living thing on the planet, mirror the left halves? Obviously, Nature has a clear preference for symmetry.
*~*~*~*
Cannibalism has a very long history on Earth, going back all the way to the trilobites of the Cambrian era of 514 million years ago.
*~*~*~*
Scientists are predicting that wildfires will pose a greater socioeconomic risk in years to come as they burn agricultural areas and cause harm to the populations there.
*~*~*~*
Wildlife corridors and safe highway crossings are critical to the survival of wildlife in many areas. That is nowhere more true than for the elusive Florida panthers.
*~*~*~*
The world's forests do more than just store carbon; they also help to keep our planet cooler, thus ameliorating the effects of climate change which is a very good reason to protect them.
*~*~*~*
The fungal disease white-nose syndrome has been around for a while, long enough to have devastated the nation's population of long-eared bats. The U.S. Fish and Wildlife Service has moved to reclassify the species as endangered after a review found that it had caused declines of 97% to 100% in affected populations.
*~*~*~*
Trees live amid an orchestra of organisms and they could be a model for us for a new way of being, a more eco-friendly way of being.
*~*~*~*
It seems that many young people are not quite ready to throw up their hands in despair over the state of the environment. They believe that it is possible to fight "climate doomism" by focusing on the positive steps we can take. And this should offer us some hope for our future.
*~*~*~*
Do alligators play? There seems to be some evidence that they do.
*~*~*~*
An international conservation group has reclassified Japan's Red-Crowned Cranes from endangered to vulnerable. The population of the bird has swelled since they have been protected. The question now is whether they could continue to thrive absent human intervention.
*~*~*~* 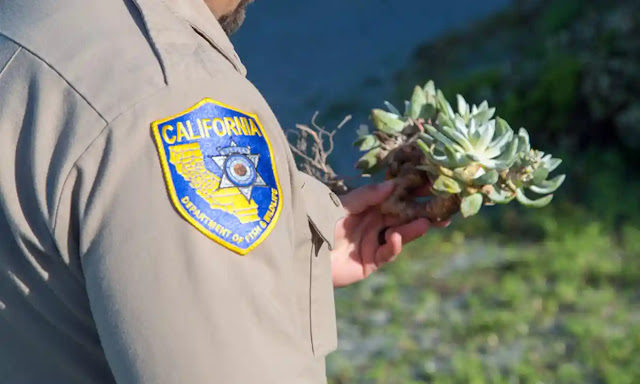 He may be the world's most notorious succulent thief, having just pleaded guilty to trying to ferry 3,700 of these wild dudleya plants from California parks to South Korea. South Korean national Byungsu Kim appeared for his sentencing hearing this week. He has already been in jail on two different continents for two years.
*~*~*~*
After spending their entire lives in captivity much of it in an old train car, four Bengal tigers have now been released into a wildlife reserve in South Africa. It is the first time they have felt grass.
*~*~*~*
Illegal deforestation is undoing the lungs of the Earth. The Amazon is being devastated by illegal roads being built through it. But first, the trees are cut.
*~*~*~*
One of the Great Barrier Reef's healthiest reefs has succumbed to bleaching. There has been widespread bleaching during the La Niña weather pattern which is causing concern that it could be even worse during the warmer El Niño cycle.
*~*~*~*
How are boa constrictors able to breathe when they are coiled around their prey and squeezing the life out of it?
*~*~*~*
Many bird species are nesting and laying their eggs as much as a month earlier than they did in the past.
*~*~*~*

This sweet little bird is, of course, the White-throated Sparrow, a winter visitor to our area. They have mostly headed north by now. They are the American Bird Conservancy's Bird of the Week.
*~*~*~*
The cherry trees of D.C.'s Tidal Basin are beautiful at all seasons, but never more than in spring.
weekly roundup