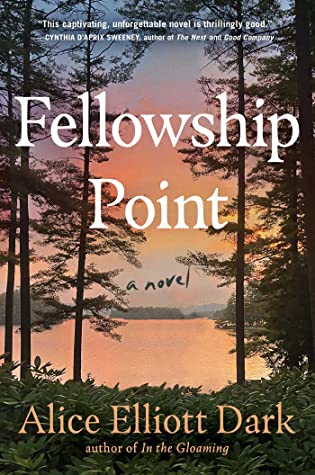 Fellowship Point refers both to the place name of a community in Maine and to the actual lifelong "fellowship" or friendship between two women, now in their eighties. The women are Agnes and Polly. They were both born to affluent Philadelphia Quaker families.

Agnes is a successful author of children's books featuring a ten-year-old girl named Nan. She has never married and has no children of her own.

Polly is a traditional wife and mother of a son named James. James is keen to see Fellowship Point developed. Agnes and Polly are determined to see the place protected from such "progress."

The storyline of the novel involves a young editor named Maud from the publishing house that handles Agnes' books. Maud is a single mother to a daughter. She is very interested in Agnes' life story and approaches her about writing a memoir. Agnes is absorbed in her own health issues and in making sure that Fellowship Point is protected; she has little energy left over to think about writing a memoir.

A secondary character who plays an important role in the plot is a man named Robert who was unjustly, erroneously accused of robbery and assault and as a result, spent years in prison. All of these characters are deeply involved in the decision that is to be made about what will become of Fellowship Point.

Back in the late 1800s, Agnes' great-grandfather had purchased 145 acres on the Maine coast and named the place Fellowship Point. He built five houses for family and friends and also a sixth house for servants who would work for the families. Most of the land eventually was controlled by an association with specific rules about membership and dissolution. In the twenty-first century, the land came to the attention of a local developer who recognized possibilities for its commercial exploitation.

Alice Elliott Dark develops her story very slowly over almost six hundred pages of fiction. Honestly, there were moments when that story seemed a bit too slow and my interest would begin to flag, but then the writer would pull me right back in and I would keep turning those pages because I just had to see what was going to happen next to Agnes and Polly and Maud and Robert. I was completely invested in all of those characters and wanted to see how their stories would turn out, hoping all the while for the best for them.

This is only my second 5-star read for this year. (The first was Remarkably Bright Creatures by Shelby Van Pelt.) I can't say that this is necessarily the best-written book or the most original that I've read, but it was a book that I connected with from its first pages, and that connection stayed with me all the way to the end. What a pleasure it was to encounter it and spend time with its characters!