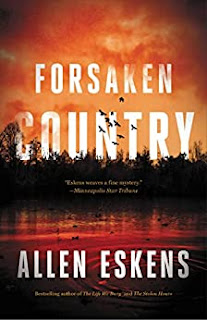 Forsaken Country is the sixth entry in a series featuring Minnesota detective Max Rupert. I had not read the earlier books which might have been helpful to orient me in the "country" of this story, but I managed to get the gist of Rupert's backstory, enough to get a sense of what makes him tick.

The most salient fact of his life is that he is a widower whose wife had been murdered and he is still mourning her. He had tracked down her murderer and disposed of him and left behind his career as a Minneapolis homicide detective to go live in his cabin in the woods. He's just on the verge of becoming an actual hermit and thinking that that might be a very good idea when his friend, Lyle, - maybe his only friend - contacts him to ask for his help.

Lyle's daughter Sandy and his six-year-old grandson Pip have gone missing. Sandy had an acrimonious relationship with her ex-husband, Pip's father, and Lyle suspects that their disappearance is his work. But he can't get the local sheriff to take any action to investigate and he reaches out to Max to request him to get involved.

Upon making inquiries, Max becomes convinced that Lyle is correct in his suspicions. He and Lyle begin tracking the ex-husband Reed to try to find Sandy and Pip. As he realizes that Max and Lyle are on his trail, Reed makes a break for the Boundary Waters, a 1.3 million acre wilderness, with Pip in tow. How will two old men ever be able to catch up to Reed and rescue Pip?

What follows then is essentially a race for the Canadian border as the men attempt to find Reed and Pip and figure out how to retrieve the child without causing him injury. As one reads the description of the wilderness through which they must search, one can appreciate how daunting such a task would be but Allen Eskens manages to find a way for his protagonist to power through and succeed in that seemingly impossible task.

I had read and enjoyed one other book by Eskens, Nothing More Dangerous, in 2020, so when I saw this new one of his on Goodreads, I decided to give it a read. I'm glad I did. It did not disappoint.