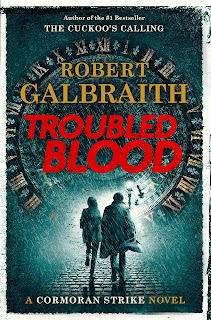 Cormoran Strike has actually become one of my favorite fictional detectives. It took me a while to warm up to him, but now with the fifth entry in this series, Troubled Blood, I'm ready to put him in the same league with Harry Bosch, John Rebus, and all the others that I look forward to following on their investigatory adventures.
This time out, Cormoran tackles a very cold case. It involves the disappearance of a woman more than forty years earlier. Margaret Bamborough went missing in 1974 under mysterious circumstances that have never been properly explained. Now the woman's daughter asks Cormoran to review what is known about the case and talk with the people who are still alive and who may have knowledge about what happened. The agency in which he is partnered with Robin Ellacott has all it can reasonably handle at the moment but Cormoran is intrigued by the circumstances of the woman's disappearance and agrees to take the case on.
Meanwhile, Robin's personal life is in turmoil. She is going through a very messy divorce from a husband who cheated on her and who is now awaiting the birth of a baby with his mistress. He is eager to get the divorce settled so that he can marry the soon-to-be mother of his child. Robin is also having to deal with some unwanted romantic attention from some of her male associates as she struggles to keep her own feelings for Cormoran from interfering with their professional relationship.
As Robin and Cormoran get into the investigation that they have agreed to pursue, they find a more complicated scenario than they had expected. Moreover, not all of the living witnesses prove to be entirely trustworthy, and even when they are trying to cooperate, time, of course, has played havoc with some of their memories.
Like all books by Galbraith, aka J.K.Rowling, this one is a behemoth at 944 pages. Even so, I found it to be a fairly quick read simply because the writer keeps things moving and doesn't tend to linger overlong on any particular point. I debated with myself about what rating to give the book and those almost one thousand pages ultimately led me to deduct a star, but overall, Troubled Blood was an enjoyable read, one that leads me to look forward to the next entry in the series.
2022 4-star reads 2022 books Robert Galbraith