Who is Maud Dixon? by Alexandra Andrews: A review 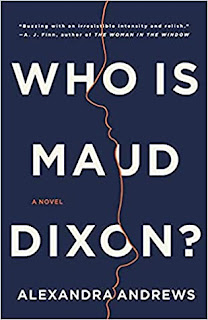 Who is Maud Dixon? She is a fabulously successful writer, author of the book world's newest sensation, a coming-of-age story about two teenage girls and a murder in a small town in Mississippi. But who is she really? No one knows except her one contact at her publishing house because Maud Dixon is her nom de plume. She chooses to ferociously guard her anonymity.
But never mind Maud. Our main protagonist here is Florence Darrow who at age 26 is an assistant at a publishing house in New York. (Not the one that publishes Maud Dixon.) Florence is from Florida, a graduate of the University of Florida at Gainesville and she feels decidedly inferior alongside all the well-connected Ivy Leaguers that she works with. Florence is devious, amoral, and resentful. She wants to divorce herself from her past and grab hold of the life which she believes that she is meant for and deserves, namely that of a brilliant writer. The only thing that is stopping her is that she can't seem to write anything.
Florence's bad attitude seems evident in all of her relationships and that extends to her one-night stand with the manager at the publishing house where she works. She expects the relationship to be more than that and when the man makes clear to her that it was a one-off and that he's a happily married man and doesn't want anything further from her, her resentment takes a creepy form. She starts stalking the man's school-age daughters and takes pictures of them and of his wife picking them up from school. She sends those pictures to the man as a kind of threat. The result is that she is called into HR the next day and summarily fired. She is also served with a restraining order that forbids her from getting anywhere close to the family.
Now jobless, Florence sends out feelers and applications to other publishing houses, and eventually, she gets a call. It seems that a famous writer is in need of a research assistant but the person who takes the job must be able to keep a secret and must sign a non-disclosure agreement. I'll bet you can guess who that famous writer is.
Up to this point, the book has been a straightforward character study of a conniving and unprincipled young woman; with the beginning of Florence and Maud's (real name Helen Wilcox) relationship, it becomes a battle of wits and a plot-twisting thriller. The two travel to Morocco, supposedly to research the new book that Helen/Maud is writing and this is where the real fun begins.
This is Alexandra Andrews' debut novel and she is masterful in employing misdirection, feints, and counterfeits in her complicated plot. The unsuspecting reader innocently follows the writer where she steers us, expecting one outcome and suddenly being brought up short when she realizes that things are not at all as she had been led to believe. Clever writer! She has constructed a delicious thriller that is great fun to read with only a few draggy points along the way. It is a formidable start for this writer.
My rating: 4 of 5 stars
Alexandra Andrews books reading reviews