My Year Abroad by Chang-Rae Lee: A review 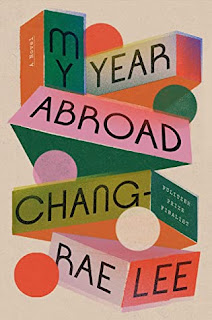 I was very excited to get my hands on the new Chang-Rae Lee book. I've heard and read so much praise for his previous books, none of which I had ever read even though I had the best intentions of doing so. So I jumped at the chance to read this one. I found his writing to be very controlled, directed, and philosophical in the way that he developed his narrative. The narrative, in other words, seemed to take us exactly where Lee wanted us to go, but that was not necessarily a good place.
Lee's protagonist is a 20-year-old college student from New Jersey named Tiller, who at the time that we meet him has had some sort of traumatic experience that has brought him, for reasons that are unknown, to the Hong Kong airport, where he meets Val, a single mother in her 30s who is also from New Jersey. It turns out they have things in common; Val, too, has had some kind of trauma in her life and they are each one-eighth Asian in heritage and both are only children. These commonalities form a basis for an instant relationship that continues when they return to New Jersey.
Back in New Jersey, they move in together and we begin to learn something about their backgrounds. Val is in the witness protection program after having informed on her husband who was apparently involved in organized crime and possibly in aiding and abetting terrorists. We also learn about Tiller's childhood and about his recent friendship with a Chinese-American entrepreneur named Pong Lou. Tiller had accompanied Pong Lou on an Asian business trip where they spent a lot of time feasting on gourmet foods, all of which are lovingly described. But the trip ended badly for both men and finally led to Tiller being alone and abandoned in the Hong Kong airport where we met him.
Back in New Jersey with Val, Tiller meets her son Victor Jr., a precocious 8-year-old. His precocity reveals itself in relation to food. He is quite the little chef, creating amazing dishes on a daily basis which leads Val and Tiller to assist him in opening a pop-up restaurant in their home. The restaurant becomes instantly famous in the neighborhood, leading to people lining up at their door every night to partake of the latest gourmet meal.
If all of this sounds a little implausible, it is only because it is.
First, I found the character of Tiller to be unbelievable. He is twenty years old and he's supposed to be this worldly-wise individual. He has certainly had some worldly experiences, but I see no evidence that they have made him wise.
Second, Val, who is in witness protection apparently because her life is in danger, cooperates in the opening of a pop-up restaurant that brings the world to her dining room and makes her very visible in the neighborhood.
Third, the eight-year-old master chef. No, it's just too much.
This is really a book for foodies. All of the imagery and the best descriptive passages here have to do with food and I can understand how such a person might really get involved in this book and enjoy it. My personal food preferences are more pedestrian and downhome and the narrative was simply overkill and lost on me.
So, my first experience with Chang-Rae Lee was disappointing. I think my main problem was that I just didn't believe Tiller and he was the narrator, the vehicle through which the story was revealed to us. I just couldn't take him or his experiences seriously. This hasn't necessarily put me off Chang-Rae Lee. I still hope to go back and read those other books, but I would only recommend this one to serious foodaholics.
My rating: 3 of 5 stars
books Chang-Rae Lee reading reviews