Let Me Tell You What I Mean by Joan Didion: A review 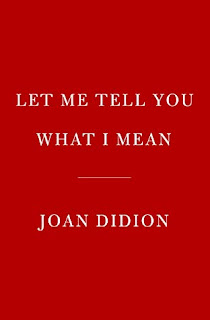 This short book comprises twelve of Joan Didion's previously published essays, most of them published in magazines. They cover the period of her work from 1968 to 2000. Several of the pieces were written in the momentous year of 1968 and for those of us who were alive and paying attention at the time, they bring back a lot of memories. Others were written in later years, the final one in 2000. That one was about Martha Stewart. The other eleven cover a wide range of topics from Nancy and Ronald Reagan and his tenure as California governor to the Vietnam War to personal meditations such as the 1976 essay entitled "Why I Write."
In "Why I Write," she tells us that it is all to do with the sound of those three words - I, I, I. She writes, she says, "to find out what I'm thinking, what I'm looking at, what I see and what it means." She acknowledges that she is not an intellectual, a thinker, and so the way that she orders her thoughts is the write them down so that she can "see" them and so begin to interpret the pictures that she holds in her mind. I can relate to that.
The first six essays were all first published in the "Points West" column that she shared with her husband, John Gregory Dunne, in The Saturday Evening Post in the '60s. They were all written in 1968. The one that especially caught my attention was titled "Fathers, Sons, and Screaming Eagles." It was about her experience at a reunion of the 101st Airborne Division, the Screaming Eagles. This was in the '60s so most of the men at that reunion were from the World War II era. Many of them had been at Bastogne, at the Battle of the Bulge, including Gen. Anthony McAuliffe who had given the famous one-word reply to the Germans who had demanded the 101st's surrender: "Nuts!" Didion talked to many of the men and found that quite a few had sons who were then in the Army and some of those sons were in Vietnam. She spoke to one father whose son was missing in Vietnam. I suppose this essay was of particular interest to me for two reasons. First, because my father had also been at the Battle of the Bulge, although not in the 101st; he was in the 3rd Army led by George Patton that had gone to the aid of those pinned down at Bastogne. And second, my husband was in the army and was attached to the 101st about the time of this reunion and Didion's essay. He spent a year in Vietnam around that time. I didn't know him then, thank goodness, but once a Screaming Eagle always a Screaming Eagle.
Didion is a fifth-generation Californian and she speaks with a Californian voice. Some of the best of these essays have a California connection. She writes of her memories of studying Milton's Paradise Lost on the train commute between Sacramento and Berkeley and tells us that she can't actually remember much about the subject she was studying but she vividly remembers the "exact rancidity of the butter in the City of San Francisco's dining car." Sensory memories are the most real to her. Another California memory is of a visit to San Simeon castle which she recounts in "A Trip to Xanadu." She says it both was and was not what she expected. She describes it as a "sand castle, an implausibility" and "a pleasure dome decreed by a man who insisted, out of the one dark fear we all know about, that all the surfaces be gay and brilliant and playful."
Reading Didion is always a pleasure and reading the essays from long ago 1968, in particular, reminds us about her prescience on various topics. Her voice is always no-nonsense and often amusing. She draws us in and makes us feel that she is writing especially for us. It's a quality that I've noted in the past as well. My favorite Didion book is My Year of Magical Thinking which is all about loss and grief and learning to deal with all that. It was published in the year after I had lost my mother. She might have been writing to me. That ability to connect with the reader is her special talent.
My rating: 4 of 5 stars
books Joan Didion reading reviews