How to Order the Universe by María José Ferrada (Translated by Elizabeth Bryer): A review 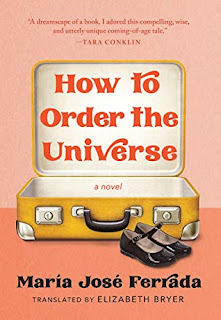 María José Ferrada is a Chilean journalist and writer of books for children. Now she has written this quirky little book for us adults. It is her first book to be translated into English and I read the translation by Elizabeth Bryer. It reads flawlessly as if its first language had been English.
Ferrada's first foray into adult fiction has a child as its narrator. At the start of the book, the child narrator who is identified only as M is seven years old and she adores her father, a traveling salesman who hawks Kramp hardware products in small towns across Chile. She is fascinated by her father's work and longs to be a part of it. Her wish is fulfilled when her father agrees to let her skip school and travel with him as he attempts to make his sales. All of this, of course, must be kept secret from her mother who would not approve and who seems to be emotionally absent from her daughter's life. Thus, M and D (the father) go on their adventures and the life of the traveling salesman becomes an alternative education for M. She learns all sorts of hardware-related information as well as about the weaknesses of the human heart and the unique moral code of the salesman. Her presence actually enhances her father's chances of making a sale as she preys on the emotions of his customers. Soon she is missing school for weeks at a time in order to be a partner in her father's work.
At first it is not clear but gradually we recognize that these events are taking place in the time of Pinochet and things get a bit more complicated when another person joins the two in their travels. He is a photographer and he is looking for "ghosts," people who have disappeared. The photographer, known as E, is particularly interested in one disappeared person who was his best friend. Coincidentally - or perhaps not - we learn that he was also the first love of M's mother. Thus, the story which started out as a charming little tale of a father-daughter relationship takes a darker turn. E's activities do not go unremarked by the government and the story which has been moving along quickly is brought up short by a scene of horror. M, in her innocence, had been completely unaware of the darker side of Chilean society in the Pinochet era, and she struggles to understand and to find a new way to relate to her family and to the wider world.
This book though quite short and easily read in one sitting encompasses a wide range of emotions as a precocious child attempts to understand the world and to find a safe place for herself in it. Ferrada obviously understands the sensitivity of children and of the way their minds work and she excels in conveying all of this in her prose. Her writing is powerful and she draws us into M's consciousness and makes us see things through her eyes. The early part of the book reads almost like a fairy tale and it is often quite funny. The latter part as M and we as readers become aware of what is truly happening in her society and how it affects people for whom she cares is a much darker tale. The book leaves us with much to consider and that sense lingers long after we've read the final sentence.
My rating: 5 of 5 stars
books María José Ferrada reading reviews