A Fatal Lie by Charles Todd: A review 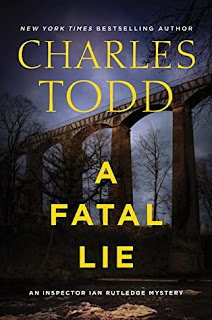 In one of the more complicated plots in this long series of books featuring Inspector Ian Rutledge, he is sent to a Welsh village to investigate a death that, at first, looks like an accident. The body of a man is found in a river and he appears to have fallen from a great height. There is a nearby canal aqueduct spanning the valley, and the assumption is that he fell from the top of the structure. He is unknown to the local residents and has no identification on him. Rutledge suspects this is no accident.
The time is 1921, some three years after Rutledge had returned from the trenches of France suffering from shell shock, haunted by actions he had taken in the war, and barely able to function. It has been a struggle to get back to an appearance of normal and he is still haunted by the voice of Hamish MacLeod, the Scottish corporal whom he executed on the battlefield for failing to follow a command, but he has a talent for investigation and is a successful Scotland Yard inspector, although not a favorite of his superintendent. The superintendent generally likes to send him to remote villages to handle the cases there. Thus, he finds himself in Wales.
His first order of business is to try to identify the victim and find out what he was doing in a place where no one owns up to knowing him. His only clues are a faded military tattoo on the victim's arm and an unusual label in the man's shirt. Also, the man was quite short. Rutledge suspects that he may have been a member of the Bantam Brigade, a unit of soldiers who were under five feet and three inches tall and thus disqualified from military service because of the height requirement. His suspicions soon bear fruit as he learns that the man was Samuel Mitford, a World War I veteran who was indeed a member of the Bantam Brigade. Tracing his background, Rutledge learns that he had a baby daughter who had gone missing a year earlier, apparently having been abducted. Rutledge begins to suspect that Mitford may have been looking for the child and that is what brought him to the area where he died. He is now certain that the man was murdered and when two more people who were connected to Mitford are also murdered, he is more sure than ever.
As Rutledge goes about the countryside attempting to tie all the loose ends of his case together, we get the authors' (the mother and son team who are Charles Todd) wonderful descriptions of the little country villages and of a way of life that is beginning to fade even in 1921. There are also the tidbits of English history that are sprinkled amid the descriptions and all of this comprises one of the chief pleasures in reading this historical fiction series. (Who knew, for example, that there was a Bantam Brigade in World War I?)
The other great pleasure is the character of Rutledge, a uniquely humane and compassionate policeman who has overcome great difficulties and sorrows to achieve what he has. The authors' ability to deal knowledgeably and sympathetically with the issue of the PTSD suffered by many soldiers is one of the strengths of the series.
Todd's plots are always strong and that is the case here, too, although this one is so complicated and convoluted that one sometimes risks getting lost in the weeds. But readers who persevere will be rewarded. This may, in fact, be one of my favorite reads in all of this long series. My only caveat for others is that if you want to read the series, by all means, start at the beginning because each entry does build on past events.
My rating: 4 of 5 stars
books Charles Todd reading reviews