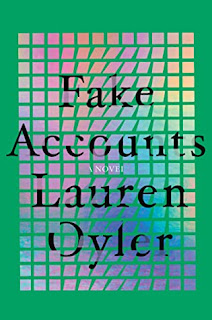 This is Lauren Oyler's debut novel after a career as a critic studying and explicating the novels of others. It is an innovative work that describes the way that social media has surreptitiously crept into our daily lives and, in some ways, has come to redefine our relationships with others and even the way that we think of ourselves. The relationships described include online stalking and the creation of fake identities, as well as the descent into paranoia and conspiracy theories and a kind of social disengagement and political derangement. That's quite a lot and it isn't even all; the book also includes numerous references - some of which I caught and some I probably missed - to other contemporary writers.
The narrative begins at a specific and unsettled point in time, the months between the 2016 presidential election and the inauguration of Donald Trump. Our narrator (who of course is nameless - how could it be otherwise?) is a young woman with a boyfriend who is named. He is Felix and the narrator has just discovered by snooping through his phone that he has a secret Instagram account devoted to the posting of conspiracy theories. It's a side of Felix that she never knew existed and it seems that he has developed quite a following for his posts. The narrator decides that she will break up with him but before she has a chance to act on that decision, she receives a call from his mother in California telling her that he has died in a bicycle accident in upstate New York. A little later she receives a thousand dollars, ostensibly from the mother. Why? There is no explanation.
The narrator had met Felix in Berlin where he had worked as a tour guide. After his death and the political upheaval following the election, she leaves her job as a blogger, supposedly to work on a novel, and she decides to move to Berlin.
In Berlin, she becomes obsessed with posting on online dating apps and meeting the men that she connects with there. But all the profiles she creates are fake. The life events that she regales her "dates" with as they meet in bars and restaurants are all imaginary - fake lives, fake accounts.
Oyler is quite a funny writer and her narrator is full of irony and snark, but underneath all that is a disquieting sense that she doesn't really know how to simply be herself and relate to the world at an honest level. She doesn't really know who that self is. We meet the narrator at a moment of profound unease in our history, a time of "fake news" and "alternate facts" and in a sense, it is not surprising such a character should create her own fake persona or multiple fake personas with which to interact with a world in which she faces an appalling rise in the alt-right and the discovery that her boyfriend may have been a part of all that.
It is also not surprising that the reader begins to apprehend much earlier than the narrator the full extent of Felix's betrayal. When knowledge comes to the narrator, the realization dawns that she has been subtly manipulated as much as she herself has manipulated those "fake accounts."
Oyler has created a clever, stylish, and droll narrative and there is nothing fake about that.
My rating: 4 of 5 stars
books Lauren Oyler reading reviews