The Committed by Viet Thanh Nguyen: A review 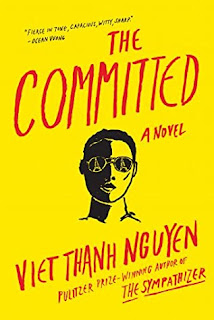 The Sympathizer who we met in Viet Thanh Nguyen's previous book has survived his time spent in a re-education camp run by his blood brother, Man. Now it is the 1980s and he and his other blood brother, Bon, are out of the camp and have made their way to Paris which is where we meet them in this book. The narrator is the only one of the two who knows that the re-education camp had been run by Man and that he is the one who was in charge of the torture which they endured there.
The narrator who describes himself as a man of two faces and two minds has a voice that demands the reader's attention and that voice mesmerizes us during the first part of this book. It is an eccentric and fractious voice that makes this story memorable and hard to put down.
We learn more about the narrator's history. We know that he was born in Vietnam and that he is half French, half Vietnamese. His father was a Catholic priest and this son has very conflicted feelings about the land of his father. France, after all, was the colonizer of his home country and as a child, he was racially abused by these colonizers speaking "in the language of Dumas, or Stendhal, or Balzac." He was humiliated by these encounters. And yet, as an adult, when he had the opportunity to flee his "re-education" he went to France. And not just any part of France but to Paris. He is both repulsed and attracted to French culture.
In France, in the second half of the book, the man of two faces and two minds becomes a drug dealer. He lives with a woman whom he calls his aunt who works in publishing and offers him entrance into the world of the left-wing French intellectuals. He quickly finds that these intellectuals have a taste for drugs and he seeks to fill their needs, or at least their desires. It's a short distance from there to becoming involved in gangland violence and to the experience of being tortured again. In fact, there are several scenes of torture in the book and they are hard to take and hard to read about. And, frankly, I felt they really didn't work that well or add anything particularly useful to the narrative. The narrator, however, approaches them with a kind of cynical humor and the assurance that the torturers cannot triumph over him because "I've lived through a re-education camp."
This is a book with multiple literary references. Voltaire and Baudelaire get their turn as do the aforementioned Dumas, Stendhal, and Balzac. The narrator reads and ponders the revolutionary ideas of writers like Sarte, Marx, and Frantz Fanon. If you remember the first book, The Sympathizer, which won the Pulitzer Prize, you will remember that our narrator is - or was - a Communist and for a time he was a spy in America for the Communist government of Vietnam. In truth, his spying was done for his blood brother, Man. His intellectual evolution makes for a very complicated story that sometimes seems to double back on itself and to descend into mayhem. Moreover, the writing itself lends to the complication as the sentences occasionally run on for pages.
This is a serious book that reviews some of the wrongs of history and perhaps even seeks to redress them in some way, but that does not detract from the fact that it is also highly entertaining. The book and its main character are not without their flaws, but, weighed in the balance, there is much more to like here than there is to dislike.
My rating: 5 of 5 stars
books reading reviews Viet Thanh Nguyen