Teaching a Stone to Talk by Annie Dillard: A review 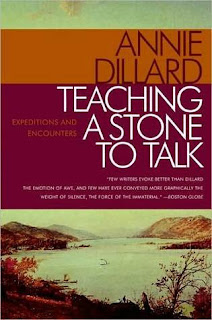 Ever since reading Pilgrim at Tinker Creek as a young adult, I have been enamored of Annie Dillard's style of writing about Nature. Teaching a Stone to Talk first came out in 1982 and it feels like I have been intending to read it almost since that time. An e-book edition was published in 2019. At long last, I have fulfilled my intention to read and I'm very glad that I did. Better late than never.
The book comprises fourteen essays, most if not all of which have been published elsewhere but here they are in one collection. The essays are broadly about Nature but they also cover themes of time and memory, as well as touching on religion.
The first essay in the book tells of Dillard's and her husband's experience in viewing a total solar eclipse. She describes the feelings of awe and even fear that she had, in spite of the fact that she understood what was happening. Imagine the feelings of those who have experienced such an event without knowing that it will soon end and their sun will still be there in the sky. I suspect that terror is not too strong a word to apply.
The second essay in the collection is one of my favorites. It is called "An Expedition to the Pole" and it compares the experiences of polar explorers to her own experience of seeking the "pole" of religious practice; specifically, she speaks of her attempts to search for the divine in the Catholic mass. The essay goes back and forth between these two ideas as she juxtaposes the obstacles she must overcome in her search with the sometimes unfathomable decisions made by polar explorers. She finds that they actually have more in common than one might at first think.
Another favorite of mine is the essay called "Living Like Weasels" in which she describes a chance encounter with a weasel at a pond which leads her to ponder what it would be like to live a human life like a weasel.
Perhaps my overall favorites are the essays that describe her experiences in the Galapagos Islands. Those islands have always held a fascination for me partly because of their connection to Charles Darwin and to the important insights he gained there that helped him to formulate his understanding of evolution, but mainly, I think, just because they seem such a magical place with animals that have never been persecuted by humans and so have never learned fear of them. Dillard tells us of the wonder of her experiences with these animals.
The title essay of the collection, "Teaching a Stone to Talk," speaks of a neighbor of hers who actually attempts such a feat. The joke is on him because of course stones and all of Nature do talk if only we have ears to hear.
All of these essays are thought-provoking and they shine through with Dillard's care and concern for Nature. They are easily up to the standard that she set with her Pulitzer Prize-winning Pilgrim at Tinker Creek. Yes, I am glad I finally got around to reading them.
My rating: 4 of 5 stars
Annie Dillard books reading reviews