A Black-bellied Whistling Duck stands as sentinel on a rotting stump in Brazos Bend State Park. They are among the most numerous ducks in this area year-round. Every evening just after sunset, hundreds of them pass over my yard on the way to their nighttime roost. And, yes, they really do whistle as they fly.
*~*~*~*
Here are seven environmental takeaways from the 2020 election season.
*~*~*~*
This was the week that the United States officially left the Paris climate agreement, making it the only country in the world to back out of the agreement. Vice-president Biden has pledged to rejoin the pact if he is confirmed as the next president.
*~*~*~*
Here's how Jeff Bezos is spending his $10 billion Earth Fund.
*~*~*~*
The irruptions of winter finches in the boreal forests southward are driven by a phenomenon called "mast seeding." Simply stated, it refers to evergreen trees that depend upon the wind for pollination. Some years produce plentiful cones on which the birds feed and other years are less generous. In those years, the birds head south in winter to find food.
*~*~*~*
Customs and Border Protection will soon complete installing 50 wildlife passages along 63 miles of wall constructed on the Arizona/ Mexico border. Unfortunately, the passages they are creating are too small for many of the mammals that need to migrate through them.
*~*~*~*
Here are some of the environmental choices that voters made this week. Nevada voters approved an amendment to the Nevada Constitution that would require utilities to produce power with at least 50% of renewable resources by 2030. Colorado voters approved the reintroduction of gray wolves to the state. Several localities in New Jersey approved raises in taxes for the purpose of protecting open spaces.
*~*~*~*
How do musk oxen manage to thrive in those long Arctic winter nights and the never-ending days? Are their circadian rhythms different from those of creatures that live in more evenly divided daytimes and nighttimes? Inquiring scientists want to know.
*~*~*~*
A recent study that analyzed data from biomes all over the world, covering an area of almost 3 billion hectares (7 billion acres) that were turned from natural habitats into farmlands, concluded that rewilding is key to recovery and prevention of extinction.
*~*~*~*
There is a Global Shorebird Count that is a popular citizen science project and takes place in the autumn each year. But next year there will also be one in the spring. It will take place on May 7 - 9. Mark your calendars.
*~*~*~*
Indigenous Colombians are mounting a defense of the Colombian Amazon with its areas of hotspots for deforestation. They are literally on the front lines of defense for the rainforest.
*~*~*~*
The weekend before the elections, highways from Texas to Kentucky to New Jersey were overrun with Trump-supporting caravans. They tried to run a Joe Biden campaign bus off the road in Texas, held up traffic, shut down a bridge, and generally pissed people off and intimidated them. There is no more perfect metaphor for the Trump era, particularly the seamless blend of fossil fuels and toxic masculinity to preserve the status quo.
*~*~*~* 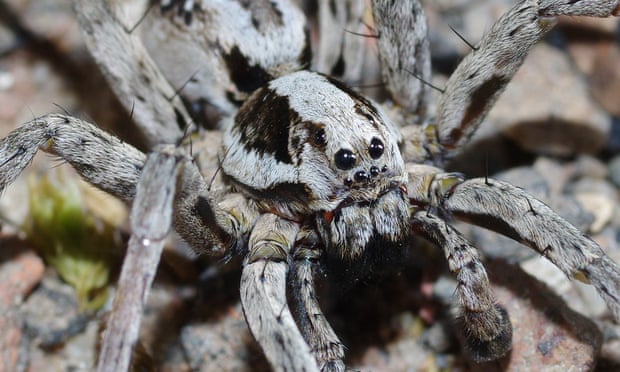 The great fox-spider had not been seen in England since 1999 and was thought to be extinct, but now a scientist has discovered the arachnid in Surrey. It is one of Britain's largest spiders.
*~*~*~* 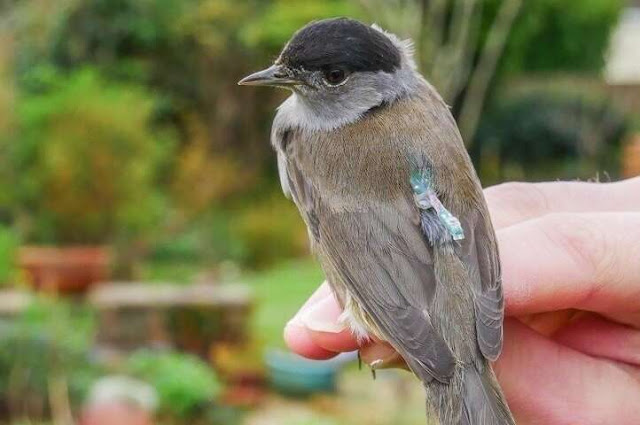 Eurasian Blackcaps like this one have different patterns of migration based on where they breed. This was learned with the use of geolocators, as seen on the bird's back in the picture, that track their flight.
*~*~*~*
The United States is using more plastic than ever and may be contributing as much as five times more than was previously thought to the pollution of the world's oceans.
*~*~*~*
The newly extreme conservative Supreme Court will soon be hearing up to four cases that involve environmental issues.
*~*~*~*
One thing that would not be able to be repaired by a Biden administration is the destruction wreaked upon the borderlands between the United States and Mexico in the misguided quest to build a wall there.
*~*~*~*
The conservation of the endangered Red-cockaded Woodpecker in the Piney Grove Preserve of Sussex County, Virginia has succeeded to such an extent that woodpeckers from there are now being introduced to other sites to help with the population in those areas. Red-cockaded Woodpeckers also nest in the county where I live and one of my fondest memories of birding is taking my younger daughter on an early morning trip to see them several years ago.
weekly roundup