The Evening and the Morning by Ken Follett: A review 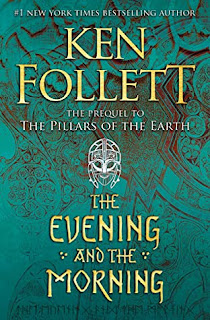 Back in 2010, I read and enjoyed The Pillars of the Earth. (Here's a link to my Goodreads review.) When I saw this book was billed as a prequel to that novel, I was intrigued and added it to my reading list. Follett has also written two sequels to that first novel which I have yet to read. I'll get to them one of these days.

Reading a Follett historical novel takes a commitment of time. Pillars was just over 1000 pages long and this current book is just a bit less than 1000. Moreover, the narrative encompasses multiple alternating storylines and a mind-boggling cast of characters from all levels of society. In this instance, the society is late tenth century and early eleventh century England in a place that would evolve over time into the town of Knightsbridge. Follett recreates this period with all of its hazards and physical realities and the competing influences of religion and politics. The time period covered is just ten years but it is a jam-packed ten years full of subplots involving the book's socially diverse cast of characters.

The narrative is straightforward and linear and quite enthralling in its granular details of life in that period. It is appallingly full of the most awful human conduct from rape, murder, infanticide, arson, to almost any betrayal the human imagination could come up with.  But the story is absolutely mesmerizing and it moves quickly because the reader can't wait to see what happens next.

The story begins with a Viking raid on the coastal village of Combe where young Edgar, the protagonist, and his family live. They are a family of boatbuilders and when the raid comes the father tries to defend their work and he is killed. The rest of the family, a mother and three sons survive, and after the raid, are forced to move to the rural backwater of Dreng's Ferry. It is at Dreng's Ferry that Edgar begins to develop his remarkable skills as a builder, continuing the theme of this series which focuses on design, construction methods, and building.

At Dreng's Ferry, Edgar meets a monk named Brother Aldred who has intellectual ambitions that parallel Edgar's pragmatic ones. They become allies.

Another subplot concerns a French noblewoman from Cherbourg named Lady Ragna. When an English ealdorman named Wilwulf comes to Cherbourg to meet with her father, Ragna falls in love with him and he becomes obsessed with her. He subsequently asks for her hand in marriage and the father agrees. Thus, Ragna moves to an England that is very different and less socially advanced than French society. The marriage turns out to be ultimately disastrous and it brings Ragna in contact with Wilwulf's despicable brothers, one of whom, Wynstan, is a thoroughly corrupt bishop and perhaps the most evil character in the story.

But Ragna also eventually meets the honorable Edgar and their attraction is instant but unacknowledged, and another layer is added to this already many-layered story.

Follett's Knightsbridge series of books traces the building of a civilization with all its structures, beliefs, customs, and laws by tracking the slow evolution over centuries of the town of Knightsbridge. His style of writing is very accessible and makes for swift reading even of a 1000-page tome. If this period of history fascinates you as it does me, you could do worse than immerse yourself for a few days in this world.