The Pull of the Stars by Emma Donoghue: A review 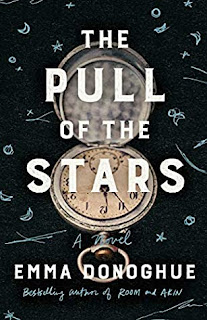 The Pull of the Stars. Or as the Italians say la influenza delle stelle.

Influenza. The time is late October, early November 1918. The world is suffering through the influenza pandemic that would eventually kill an estimated 3 to 6 percent of the human race, more than died in World War I. That Great War is winding down and soon an Armistice will silence the guns. But that other war, the one against the pandemic, is heating up. The combatants in that war are medical personnel like Julia Power, a 29-year-old soon to be 30-year-old midwife working at a crowded and understaffed Dublin hospital. Julia is unmarried and shares a house with her younger brother who came back from the war shell-shocked and mute. He has not spoken since his return, but, other than that, he functions well in caring for the house and raising some vegetables for their table while his sister works.

The staff shortages at the hospital have left Julia as the only nurse on duty overnight in the "fever/maternity" ward, a makeshift section in one room with three beds designated for influenza patients who are pregnant. Almost all the action of this novel takes place in that claustrophobic room as Julia struggles to care for her patients using the few treatments available, which mostly consist of whisky and chloroform.

Doctors are scarce and only called on in the direst need, but the administrators of the hospital, in their desperation, at least have the good sense to call in Dr. Kathleen Lynn, a rare female doctor in the city. She is also a wanted criminal, hunted by the Dublin police for her role in Sinn Fein's 1916 uprising. Dr. Lynn is actually a historical figure and a brilliant doctor.

In her time of greatest need, Julia also receives another helper, a young volunteer named Bridie Sweeney. Bridie has led a life of poverty and abuse, beginning with her placement in one of Ireland's notorious orphanages. They were so neglectful of her well-being that she didn't even know when her birthday was. She thought she was around twenty-two. But a life that could have turned her cynical and brutal had instead given her a tender and caring nature and although she had no medical knowledge, she was a quick learner and an eager worker. She quickly made herself indispensable to Julia.

Together, these three very different but capable women deal with one crisis after another; things such as life-threatening hemorrhages, multiple premature labors (an apparent side effect of that influenza strain), sudden skyrocketing fevers, convulsions, and a rapid case of influenza that progresses to cyanosis in a few hours. During all this, there are also babies to deliver and try to keep alive. A good day in the ward is when no one dies. Those days are rare.

In focusing so narrowly on this one room and its occupants, the patients and their carers, Donoghue is able to present an exceptional amount of detail about the lives of these women. The patients who labor and deliver there have mostly led lives that have been ruled by poverty, misogyny, and abuse. The women are expected to be constantly pregnant. There was apparently a common saying that, "She doesn't love him unless she gives him 12." By the time these women are in their mid-twenties, their bodies are beset by all the stresses that such constant bearing produces. It is harrowing to read about.

Dr. Lynn at one point criticizes the government for the high rates of poverty and infant mortality. Julia responds that she doesn't have time for politics. To which Dr. Lynn replies, "Oh, but everything's politics, don't you know?"

As we all try to live through our current pandemic which has so many parallels to that one a hundred years ago, I have to agree with Dr. Lynn. Still today the burden of the disease falls most heavily on groups that have been mistreated and neglected by society and by virtue of that are perhaps least well-equipped to fight it off. The more things change the more they remain the same.

Emma Donoghue's account of the 1918 pandemic is brilliantly written and kept me turning those pages, wanting to know what would happen next. The parallels between that time and 2020 really are uncanny.