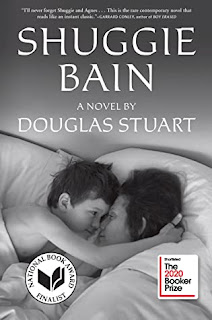 Imagine how all of those publishing houses that rejected Douglas Stuart's debut novel must have felt after Grove Press finally took a flyer on it, published it, and subsequently it was nominated for practically every literary award in the world. A bit chagrined I would imagine. And now the book has won perhaps the most prestigious of those awards, the Booker Prize for Fiction. All the accolades are well-deserved in my opinion. It is an amazing work of art.

The action of the novel takes place in the 1980s and 1990s in Glasgow. It is the coming-of-age story of young Hugh (Shuggie) Bain. The child Shuggie lives with his parents and older step-brother and step-sister and for a while with his maternal grandparents as well. But that doesn't last long. The father moves his family out to a council house in a poor neighborhood and then he abandons them. The sister marries and moves to South Africa. The brother stays on for a few years but then his mother tosses him out and Shuggie is left alone with her.

Agnes is a beautiful woman who takes a lot of pride in her appearance and keeping her house neat, but she has a serious problem. She is an alcoholic and from the time we meet her, the trajectory of her life, except for one blessed year, is all downward. She is repeatedly betrayed and abused by the men in her life and she never seems to learn. At one point, with the help of Alcoholics Anonymous, she does manage to get sober and stay sober for a year. It is a glorious time for her sons and at the end of that year, they throw her a one-year birthday party, but then the current man in her life who she had dreams of settling down with goaded her into taking a drink. Once she starts she can't stop and her fate is sealed by that lapse.

Throughout all her struggles and her downward spiral, the one constant in Agnes' life is Shuggie. The child adores her and tries to take care of her for just about ten years of his young life, from the time he is five until he's fifteen. At the time he is five, Shuggie already recognizes that he is different from other boys. He is not interested in the things that interest them. He is effeminate and likes playing with dolls. At school, he is bullied unmercifully. He has no friends to speak of. His best friends are his mother and his brother who does his best to look out for and protect Shuggie even after his mother throws him out of the house.

This book's narrative is raw and rich in descriptions of bodies and physical sensations. It is told in Glaswegian prose that is full of slang and often rendered phonetically. That can make it a challenging read, but once one gets into the almost musical rhythm of the book, the unique language only enhances the story and makes it more visceral.

This is a story of squalor and heartbreak where things continually go from bad to worse to worst, and honestly, it can be excruciating to read, but the thing that redeems it and makes it just about bearable is the constancy of Shuggie's love and care for his mother. The characters that Stuart describes are often monstrous in their actions; it was really hard for me to find sympathy for any of them except Shuggie and his brother. But Stuart describes all of them lovingly. Their behavior may be monstrous, but they are not monsters. They are people who have been damaged and broken by life.

Through all the years of one disastrous mistake and one wrong turn after another, Shuggie never stops believing that his mother can get better if only he can find the right way to help her. And he never stops trying.

It was only in the author's afterword that I learned that the novel is actually based on his own life and finally I understood why the story seemed so personal and heartfelt. His mother was an alcoholic and his brother tried to keep him safe. He credits them with the inspiration for his writing.

The starkness of this study of family dysfunction and parental alcoholism and its impact on the children who are forced to live through it will break the heart of anyone who has one. But Shuggie Bain's steadfast love in the face of unremitting disappointment is the bright shining light that pierces the gloom of that tunnel. He is a character that you will love and long remember. I'm very glad his story has won the Booker Prize.