A Song for the Dark Times by Ian Rankin: A review 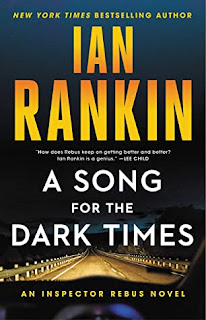 Inspector Rebus is long retired now from the Scottish police force. Suffering from COPD, he can no longer easily manage the stairs to his apartment and so he and his dog, Brillo, are moving into a ground floor apartment that has recently become available. Assisting him with the move is his longtime colleague and friend (and surrogate daughter) DI Siobhan Clarke.
In the midst of the move, his real daughter Samantha frantically calls her father to say that her partner, Keith, has been missing for a couple of days and she doesn't know what to do. She also admits to her father that she had been having an affair with a resident of a local commune and that Keith knew about it. Samantha, Keith, and their school-aged daughter live in a remote part of northern Scotland. Rebus, fearing the worst and knowing his daughter will be a suspect if something has happened to Keith, packs his bags, leaves Brillo in Siobhan's care, and prepares to head north.
Meanwhile, Siobhan has been assigned to the investigation of the murder of Salman bin Mahmoud, a wealthy 23-year-old Saudi whose family is out of favor with the government back in his home country. The murder has all the earmarks of a hate crime and Malcolm Fox, a detective from the state police investigation unit is sent to be a part of the investigation. Rebus' old nemesis Morris Gerald Cafferty also is interested in the case and in Fox.
Rebus was never much of a father but he was always a brilliant detective, and with a new "case" on his hands, he reverts to form and starts tracing Keith's movements and trying to discover what has happened to him. He reasons that, after all, this is the best way to help his daughter. He visits the local commune where his daughter's now former lover lives and encounters a local well-to-do landowner. He also visits a WWII camp that held captured German soldiers, as well as displaced persons. Keith had been fascinated by the history of that camp and it is there that Rebus discovers his murdered body.
As the investigations of the two murders - Keith's and the one in Edinburgh - progress, it slowly becomes apparent that there might be a connection between the two. The backstories begin to converge and one can see how they overlap. This is the kind of storytelling that Rankin has always excelled at and it is good to see that he hasn't lost a step in this his twenty-third John Rebus novel. As far as his creation is concerned, he may have lost a step or two physically. Rankin has always allowed him to age more or less naturally over the years and he now suffers the consequences of all that smoking he did over the years. But he hasn't lost any steps mentally. The years have only added to his wisdom and wiliness. No one outshines him when it comes to the art of being a detective.
Moreover, through it all, he's never lost his interest in music. It's always one of the things that sustains him through good times and bad. The title of this book is the title of a playlist that was created for him by Siobhan and that he listens to on his trip north. It's an eclectic collection with everything from rap to Leonard Cohen.  I've followed the Rebus series over the years as I've aged along with the character and I've always appreciated his eclectic approach to music and to life. What a pleasure it was to spend time with him once again.
My rating: 5 of 5 stars
books Ian Rankin reading reviews