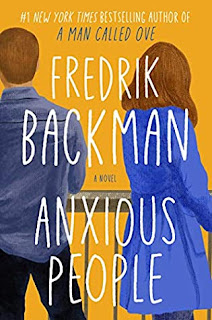 This is only the second of Fredrik Backman's novels that I have read, but I'm getting the definite impression that he writes character-driven stories. Never more so than in this case. His Anxious People are eight random people who are brought together in a would-be hostage situation in a small town in Sweden after a hilariously botched bank robbery and the two police officers, father and son, who are sent to deal with the situation.

Each of these flawed characters has his or her unique way of viewing the world and Backman's genius is that, even if we don't agree with those views, he makes us understand that character's perspective and how it was formed. He does it insidiously, bit by bit so that we scarcely even notice what is happening, but in the end, we are able to understand a world-view that may not be our own, but that is legitimate within its own context. That is not a small thing.

One of his tools in accomplishing this remarkable feat is humor. Regardless of the situation, humor always bubbles just below the surface and sometimes breaks through in a belly laugh. And thus his quirky story about this collection of misfit characters unfolds in his scattershot but intricately plotted way. His compelling backstories with their heartbreak and their heartwarming secrets are revealed slowly and begin to make a pattern that we can see has led these particular people to this particular place in time. We also begin to see that many of them are connected in some way by a bridge.

That bridge had been the scene ten years earlier of a suicide. The impetus for the suicide had been Sweden's and the world's economic collapse. Ten years later the suicide still haunts those who witnessed it and those who tried to stop it.

Backman's narrative dips back and forth through time as he unravels the mysteries of the hostages, the hostage-taker, and the police. We come to understand that these are all imperfect people who are trying in their own way to do their best, even though being human is "idiotically difficult." Backman is a philosopher/novelist who is able to write humorously and poignantly about life, marriage, parenthood, love, and death. His bottom line message seems to be that kindness and compassion can ease our passage through life, both when we receive it ourselves and when we show it to others. It's not a bad message to receive in November 2020.