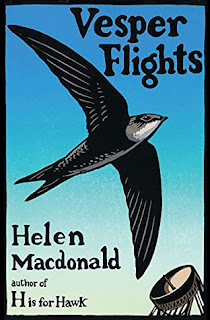 I would have bought the book for its cover alone, a picture of a swift in flight. I have a lifelong love of swifts, those magical birds that live their lives entirely on the wing, except for when they are nesting and brooding eggs or chicks. They eat, drink, mate, and even sleep in the air. They have tiny little feet that are too weak for perching but are able to cling to the vertical side of a chimney or similar opening and in such places, they build their nests and rear their young until they too are ready to take to the air. Macdonald's swift is the Common Swift of Europe. On this continent, we have the Chimney Swift which nests in my part of the world, and the Vaux's Swift of western states. There are slight differences between them but all three live their lives in the air. Macdonald's new book, a collection of essays about nature and our relationship to it, includes an appreciation of the swift in the essay which gives the book its title, "Vesper Flights."
Macdonald's last book was H is for Hawk which told how she coped with her grief over her father's death by sublimating it into the training of a magnificent Goshawk for falconry. Through that process, she learned a lot and not just about hawks. She learned lessons about herself and, more widely, about the human species. In this book, she broadens her outlook to much of nature and once again she learns that studying nature can teach her lessons about her own species. Her varied topics include riffs on fungi, migration patterns, hares, global warming, birds' nests, and even goats. But through it all, there is a sense of sorrow and an overarching theme that might be stated as an elegy for the world of nature that we know as the sixth known great extinction in the history of our planet inexorably continues.
In one of the most affecting essays, Macdonald writes of the meadow that she knew as a child, the meadow that inspired her to take up her life's work as a naturalist. She revisited the meadow occasionally through the years of her adulthood until one year she went there and the meadow was gone. It had been turned into lawn. She writes:

"When habitats are destroyed what is lost are exquisite ecological complexities and all the lives that make them what they are. Their loss is not about us, even though when that meadow disappeared, part of me disappeared, too, or rather passed from existence in a memory that even now batters inside my chest. Look, I can't say to anyone. Look at the beauty here. Look at everything that is. I can only write about what it was."

When contemplating the lessons of nature and the violence done to it, Macdonald admits she is often overcome by emotion. She writes that she wept at seeing that her meadow and all the lives it held had been destroyed. She weeps also when she holds a falcon egg to her face and makes a clucking sound and hears that the chick inside that is near hatching responds to her. Feeling sad over the turn of her life she sits down next to a river and after a while, a swan walks out of the river and sits down beside her its feathers touching her leg and she finds the release of tears. And then there is the joyous experience of watching birds in flight, of watching animals be themselves in nature.

The subjects of her essays, most of which are quite short, often only a few pages, are, as I said, varied but they do tend to be heavily weighted toward the world of birds as in her descriptions of birdsong and its uses or in the quick cobra-like strike of a heron stabbing at a fish or the flight of the Common Swift.  In all of these, Macdonald expresses her gratitude that this "other" world exists and goes its own way independent of humanity. It's a gratitude that I share.