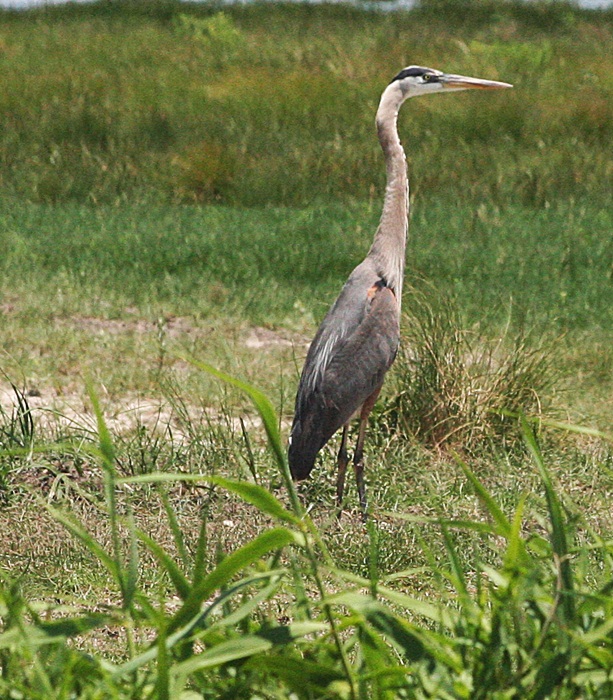 A Great Blue Heron stands tall in a field. Great Blues are common around here but they are always striking in appearance and we always pause to look at them.
*~*~*~*
This week David Bernhardt, acting secretary of the Department of the Interior and former oil-industry lobbyist, announced a plan to remove gray wolves (Canis lupus) from the protection of the Endangered Species Act throughout the lower 48 states. It's déjà vu all over again. There have been repeated efforts to delist gray wolves over the years. Once again the wolf's defenders will be fighting the plans in court.
*~*~*~*
Efforts to return jaguars to Argentina's wetlands are underway. If successful, the planned rewilding of the great cats could restore the health of an entire ecosystem, but the project is not without its challenges.
*~*~*~*
As devastating as the western wildfires are, there are actually some species that benefit from them. These include numerous bat species and the Black-backed Woodpecker.
*~*~*~* 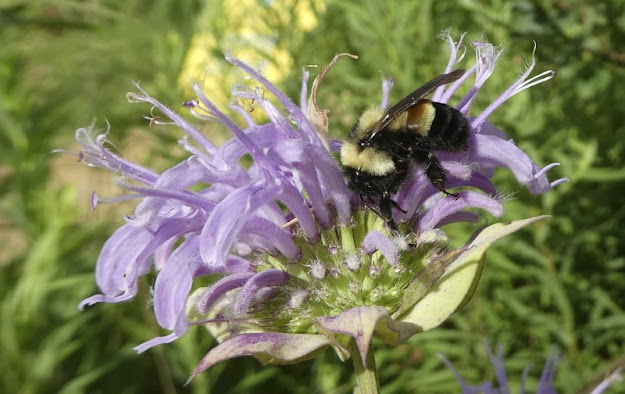 Even though it is the first bee to be listed as endangered in the continental United States and it has lost 90% of its population in the last couple of decades, the U.S. Fish and Wildlife Service has declined to designate critical habitat for protection for the rusty-patched bumblebee. Environmentalists say this will worsen the bee's chance for recovery.
*~*~*~*
A juvenile humpback whale that made its way to the entrance of New York Harbor in July was a hopeful sign that the waters in the area are cleaner than they were just a decade ago, but it quickly became clear that the whale was in trouble. Its tail was entangled in a thatch of fishing gear that appeared to be anchoring it to the seafloor. Help soon arrived. Engineers spent three days working to remove the mess of ropes, netting, buoys, and steel cables in order to set the whale free.
*~*~*~*
A dingo-like animal with a distinctive howling style, the New Guinea Singing Dog, endemic to the highlands of that country, had been thought to be extinct, but scientists announced that they have now been confirmed by DNA analysis to exist on Papua.
*~*~*~*
After being quiet for more than six years, the Giantess Geyser in Yellowstone National Park erupted on August 25. The geyser, as its name implies, is one of the largest in the park and in the past had erupted between two and six times a year, and finally, it was time to let off some steam once again.
*~*~*~*
A study has found that YouTube videos of tourists getting very close to and even touching gorillas in the wild inspire more people to do the same, and it could spread diseases like COVID-19 to the critically endangered apes.
*~*~*~* 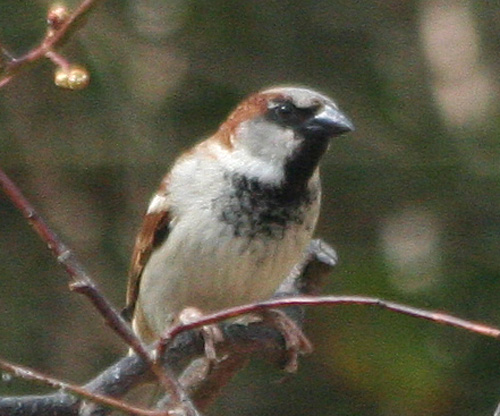 A House Sparrow in my backyard keeps a wary eye on me.

House Sparrows are clever little birds, even though they are sometimes a nuisance. A new study confirms the ability of these highly social birds to learn from their environment and from each other and to adapt their behavior accordingly.

An analysis shows that over a period of two years, 2016-2018, there was an increase of 34% in the acreage in national wildlife refuges that were sprayed with agricultural pesticides, including pesticides that are known to harm wildlife.

A census of the world's glacial lakes shows that there are more of them than there used to be and that they are growing in size as the glaciers that feed them continue to melt in the warming climate.

Over the next several weeks more than a billion birds will be passing through Texas on their fall migration. Most of the migration flight occurs at night and that can be particularly deadly because artificial lights can confuse the birds. Humans can make their passage safer simply by turning off unnecessary lights.

Should Nature have rights? A court case in Ecuador over protection for Los Cedros Reserve, one of Earth's most biodiverse habitats, could confirm such a right and establish a precedent for the planet.

When you consider animals as earthmovers, you might think of gophers or earthworms, but new Australian research claims that the champion earth mover among animals is actually a bird; the Superb Lyrebird can move a staggering 155 tonnes of soil per hectare of forest litter in a year.

Renewable types of energy have now passed coal burning as a source of energy in the United States. Coal production is expected to be down by 31% this year.

Seabird poop is valuable stuff it seems. Scientists put a price tag of more than one billion dollars annually on guano's global benefits which range from use as an agricultural fertilizer to coral reef enricher.

Twenty-one states have banded together to sue the federal government over its rollback of the National Environment Policy Act, which for 50 years has required the government to weigh environmental and community concerns before approving pipelines, highways, drilling permits, new factories or any major action on federal lands.

The mountain lions around Los Angeles are flourishing. A record 13 kittens were added to the population between May and August according to National Park Service researchers.

Finally, reward yourself with a read of Margaret Renkl's essay which tells us that every living thing is holy.