Some Go Home by Odie Lindsey: A review 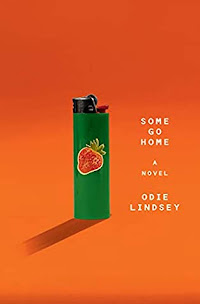 If you drive for a bit over an hour southeast from Memphis, you might come across the little (fictional) town of Pitchlynn, Mississippi. Pitchlynn is virtually indistinguishable from dozens of other dusty, hardscrabble, mostly rural towns scattered over the northern part of that state, but to those who live there, it is a place like no other. It is home. The people who live in Pitchlynn have mostly lived there since birth. Most have never traveled very far afield. Some did move away for short periods but have inevitably returned as if they couldn't be comfortable living anywhere else.

One of those who went away and came back was Colleen. She joined the army right out of high school and was eventually deployed to fight in Iraq. She returned home after her service and stayed with her parents. The scenes from that war continued to haunt her. She suffered from PTSD and sought relief in drugs. Her life was seriously headed off the rails until a local beautician befriended her and made Colleen her project. She worked to get Colleen's life back on the straight and narrow and to give her a purpose for living. Part of her plan in accomplishing this was a bit of matchmaking. She introduced Colleen to "good ole boy" (really the best ole boy) Derby Friar. Colleen wasn't interested and repeatedly rebuffed him, but his persistence finally won her over. They married and at the time that we meet them, they are expecting twins.

But Colleen's and Derby's lives are not all smooth sailing by any means. Derby had changed his name to Friar - his mother's maiden name - to get away from association with his father, Hare Hobbs. Back in the 1960s, during the campaign to extend civil rights in Mississippi, Hobbs had been accused and tried for the brutal murder of a local Black landowner, a man named Gabe. His trial ended in a hung jury and the prosecutor at the time declined to retry him. Now Hobbs is eighty years old and justice has come calling once again. He is to be retried for that murder.

Ironically, one of the men assigned to guard Hobbs as he awaits trial is a Black man called Doc and he is married to one of Gabe's descendants. The two converse in the long hours they spend together.

Hobbs also has two other children who haven't disowned him. There is Winnie, Derby's sister, who has a daughter who is the apple of Hare's eye. Winnie maintains good relations with her father and visits him in jail. Then there is Sonny, an older half-brother of the two. Sonny's mother was married to Hare at the time of Gabe's murder. He was a child but he remembers that Gabe drove him and his mother to the station when his mother wanted to escape the marriage. His mother took him to Chicago where he was raised, but now as an adult and a successful businessman he still feels a connection to his father and determines to fly to Mississippi to testify for him because he thinks he can give him an alibi for the time Gabe was killed.

Finally, there is J.P., also from Chicago but married to a girl from Pitchlynn. His wife was touched by tragedy as a child when she and her best friend were playing in an ancient tree and her friend, a daughter of the leading family in Pitchlynn society, fell to her death. She was blamed by the girl's mother for the death and in order to get her away from that judgemental atmosphere, her family moved her to Chicago where J.P. met her as an adult and married her and they had a baby. She had wanted to move back to Pitchlynn with J.P. and her daughter, but J.P. had put her off hoping she would change her mind. Then, while their daughter was still a baby, she committed suicide. The house that she was heir to in Pitchlynn was left to J.P. and finally, he moved there with the baby and hired Derby to help him renovate the house.

This is Odie Lindsey's debut novel and it is a creditable effort. His narrative is told through the individual stories of all these interconnected characters. Their connections trace back in one way or another to the odious Hare Hobbs. The most successful of the character portraits, in my opinion, was Colleen. I really liked her and would have liked to spend more time with her, but the narrative kept veering off into other territories. Also, there were parts of the narrative that depicted cruelty to animals that were difficult. In truth, I scanned past most of those parts. On the whole, though, it was an interesting read and I felt that Lindsey, who is the writer-in-residence at Vanderbilt University, got the portrayal of a small, insular southern town, places that I'm quite familiar with, just about right.