The Death of Vivek Oji by Akwaeke Emezi: A review 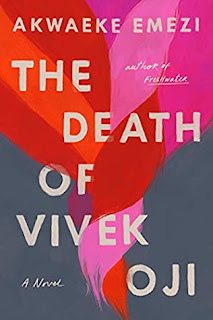 Akwaeke Emezi is a non-binary transgender writer from Nigeria who is known for their acclaimed debut novel, Freshwater, which tells the semi-autobiographical story of the spirituality and gender issues of the Igbo culture,  as experienced through the protagonist, Ada. This current novel again explores such issues as they exist alongside the Western construction of society in Nigeria.

As we enter the story, Vivek Oji is already dead. "They burned down the market the day Vivek Oji died," reads the first sentence of the novel. From that point, we get recollections of Oji from his friends and family interspersed with his own observations from beyond the grave. In this narrative, Oji is both alive and dead, sometimes in the same paragraph. If that sounds confusing, it really isn't. Within the context of the framework devised by the author, his posthumous narration seems perfectly plausible and ordinary.

Oji had been born the child of an Indian mother and Igbo father on the same day that his grandmother died. His grandmother had a scar like a starfish on her foot and Oji came into the world with a similar scar on his foot. His father dismisses the mark as mere coincidence and yet in light of later events, it seems to have been a foreshadowing of the future.

As a child, Oji seemed ambivalent about gender. He loved playing with his mother's jewelry. He was always quite slender and beautiful and as he grew up he told his friends that they could refer to him as either she or he because he was both. As a young adult, he let his hair grow long, well past his shoulders. He abandoned his parents' dream of attending a university in America. He had started to attend a university in Nigeria but didn't last long there. His father brought him home and the family became convinced he was suffering from a sickness. Others believed he was possessed by a demon. And then one evening his mother, Kavita, opens her front door to find her son's broken, naked body lying there, his blood seeping into the welcome mat. As Kavita cradles his broken skull, we are reminded of a description of her caressing the head of her little boy, "the back curve of his boy skull, the soft hair and the warm skin underneath, the formed bone shaping him." The juxtaposition of the images is almost unbearably sad.

There had been riots in the marketplace on the day Oji died and it is assumed that he met his fate in one of those disturbances, but who then brought his body home and left it on his parents' veranda? The facts of his death are a mystery that haunts his mother and she, in turn, nags his friends with questions, trying to find answers. But as she harasses them with her inquiries, it becomes clear that she didn't really know her son. She could not see his true self which was both male and female and that was true of many of the family that claimed to love him but didn't really see him. Indeed they profoundly and painfully misunderstood him. In a sense, he was invisible to them. Oji asks at one point, "If nobody sees you, are you still there?"

Throughout the novel, Oji is primarily referred to as "he" but at the time of his death, he had begun opening up to his friends and he lived unabashedly as both he (Oji) and she (Nnemdi, his grandmother's name). In this personage, he was "bright and brilliant and alive." It was a dangerous way to be and it ultimately led to his death which is finally explained near the end of this amazing narrative.

Reading Akwaeke Emezi's eloquent and poignant novel allowed me to feel perhaps just a little bit of what it must be like for someone who identifies as non-binary and who is forever an outsider in society. The novel, in solving the mystery of Oji's death, uncovers the story of a person whose self-acceptance shields them in some ways from the pain of the world, and finally, in death, Oji's life becomes fully visible to those who loved them.