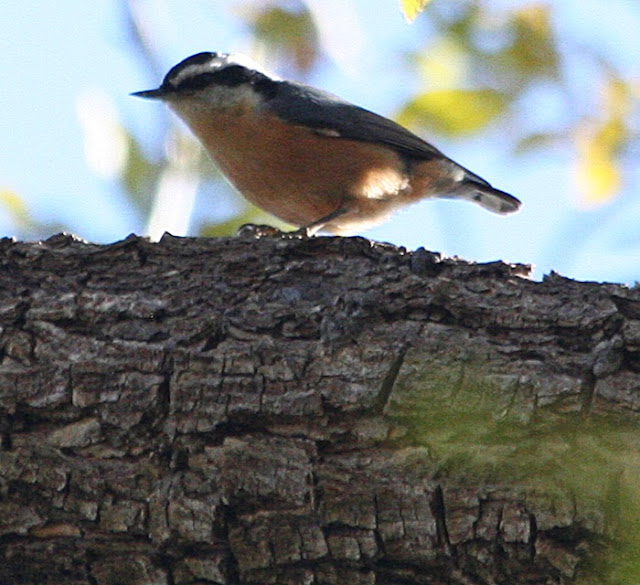 Red-breasted Nuthatch. We get them here in some winters. I photographed this one in my backyard a couple of years ago. We'll have to wait to see if they come this far south this winter.
*~*~*~*
Why are so many birds dying in New Mexico and parts of Texas and Colorado? Huge numbers of migratory birds have been dropping dead in the area, so far for unexplained reasons. Speculation centers on the pollution from the wildfires in the West, combined with long-term drought and record heatwaves. Recently, there was also a cold snap in the mountains that may have contributed. But it is a mystery so far.
*~*~*~*
Unsurprisingly, the president has picked a climate change denialist to head the National Oceanic and Atmospheric Administration, the agency that oversees weather forecasting, climate research, and fisheries.
*~*~*~*
Chemical analyses of ancient sediments have allowed scientists to confirm that the planet is presently warming faster than it has in tens of millions of years.
*~*~*~*
The New York Times has an interactive map that allows you to see what the greatest climate risk is in the county where you live.
*~*~*~* 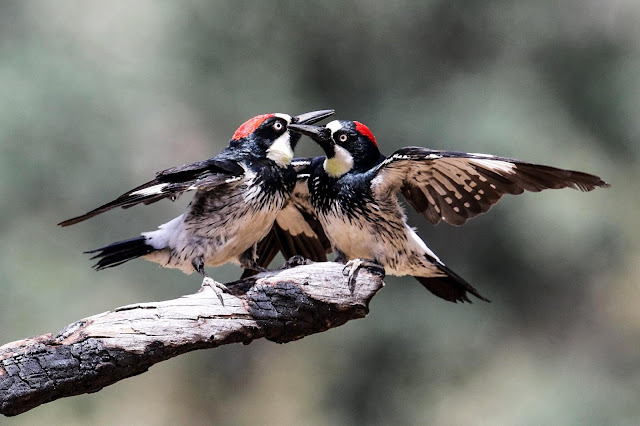 Acorn Woodpeckers disputing territory. These woodpeckers can be ferocious fighters and when a territory opens up, the fights can get, well, beastly. They can also draw an audience. Other woodpeckers flock in from all around to watch.
*~*~*~*
As the effects of climate change worsen, this country will likely look quite different than it does today. Part of the change will be in centers of population as the changing climate forces people to migrate.
*~*~*~*
The Puerto Rican Parrots in a captive breeding program have developed a unique dialect. The question now is when they are released into the wild will wild parrots be able to understand them?
*~*~*~*
Gray wolves that were relocated to Michigan's Isle Royale National Park in order to rebuild its nearly extinct population have now formed themselves into packs and are helping to reduce the moose population which had grown out of bounds.
*~*~*~*
The discovery of 120,000-year-old human footprints on the Arabian Peninsula may help to shed further light on the timeline for the spread of Homo sapiens out of Africa.
*~*~*~*
Orcas from the Strait of Gibraltar to Galicia have been ramming and harassing yachts in the area, damaging vessels and injuring crew. Scientists are at a loss to explain the unusual behavior, although it is suspected that it is somehow related to stress that the animals feel.
*~*~*~*
And here's another mystery: the "unfathomable destruction" of thousands of rare wildflowers in Nevada. The wildflowers called Tiehm's buckwheat were located in an area where a proposed lithium and boron mine would be located. There has been fierce dispute over the location of a mine there and the destruction may be related to that or it could be a natural phenomenon. No cause has yet been confirmed.
*~*~*~*
When birds of prey feed on rodents that have been poisoned, they, too, can be poisoned. The second-hand rodenticides can be deadly for them.
*~*~*~*
The Arctic is shifting to a new climate because of the effects of climate change. The new climate will feature less ice and snow and more open water and rain.
*~*~*~*
A new scientific paper has identified 65 species of plants that have gone extinct in North America since the continent was colonized. In truth, the total is probably much higher.
*~*~*~*
Sadly, it has been confirmed that at least two California Condor chicks have died in the wildfires there.
*~*~*~*
A female ancient python, about 62 years of age, who has not had contact with a male python for at least 15 years, has surprised her keepers at the St. Louis Zoo by laying seven eggs.
*~*~*~*
The Northern Hemisphere has had its hottest summer on record this year, according to NOAA, which at the moment is still run by scientists.