Heaven, My Home by Attica Locke: A review 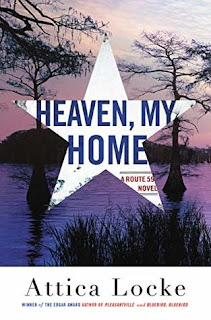 This is the second of Attica Locke's Highway 59 series, a sequel to Bluebird, Bluebird which I read three years ago. The books feature a Black Texas Ranger named Darren Matthews. Darren was raised by two uncles after his father was killed in the Vietnam War. One of those uncles was the first Black Texas Ranger; the other uncle was a criminal defense lawyer. Darren was all set to follow in the footsteps of his lawyer uncle until a particularly horrific hate crime impelled him to drop out of law school and go back to Texas to be a Ranger and uphold the law.
But here we see him violating his oath by lying to protect an elderly man, an old family friend, who might have been arrested for murder without the benefit of that lie. His motive for lying might have been honorable but it has also landed him in a world of trouble from which he will have to try to extricate himself as he works a new case.

He is based in Houston and after his last case, he has been given a new assignment of tracking the Aryan Brotherhood of Texas, which he does mostly from behind a desk. At the same time, he is working on his marriage which had been strained to the breaking point by his work.

Word comes that a child is missing in East Texas, near the town of Jefferson and there is a connection to the Aryan Brotherhood. The child is the son of one of the ABT's leaders who is now in prison. The boy lived with his mother and her new boyfriend, an ABT wannabe, in a community that was founded by escaped slaves and is occupied by their descendants and members of the Hasinai Caddo tribe of Native Americans. The family along with a few other ABT members are essentially squatters on the land. And now, the boy, Levi King, has gone missing from a ramshackle boat that he took out on Caddo Lake, the largest natural lake west of the Mississippi River. The last person to see him was apparently an elderly Black man who lives by the lake and owns the property where the community is located. Because of the ABT connection, Darren's boss sends him to look into the case.

The boy has been missing for a couple of days already when Darren arrives on the scene. This is a nine-year-old boy and one thing that I found curious about the narrative was that there seemed very little urgency on the part of law enforcement to look for him. The mother is distressed. The father, in prison, has written a heartfelt letter to the governor asking for his help. The boy's older sister who was the only one at home when he went missing is upset and asks Darren to find him. But everyone else, including Darren, seems rather laid back about a missing child. Darren, in fact, seems to spend much of his time in Jefferson worrying about his own problems and getting drunk.

When suspicion falls on the elderly Black man in regard to the disappearance, Darren's FBI friend who is now present in Jefferson and joining the investigation seems eager to charge him. He believes the child is dead and wants to charge the man with a hate crime. These events take place in the weeks after the 2016 election and the FBI is eager to show the newly elected president that they can look at hate crimes from both sides. The agency is anxious about its future and eager to curry favor. And once again Darren finds himself in the position of feeling protective toward a potential suspect.

Locke adeptly delineates Darren's feelings about the possibility of delivering a Black man to a justice system that so seldom seems to deliver justice in these situations. He is torn between his oath to uphold the law and his instinct to protect those whom the law frequently fails to protect.

Perhaps the best part of the book for me was Locke's rendering of the atmospherics of a small East Texas town. She clearly has some experience and understanding of such places as do I. I could appreciate her empathetic portrayals of the people and the checkered history of those towns.

The book ends on a bit of a cliffhanger and I would assume there are more entries to come. I think Locke has a winner with this series.