Summer by Ali Smith: A review 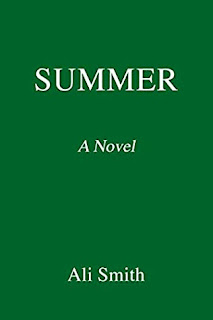 This is one of the books that I had been highly anticipating this year and so I pounced on it as soon as it was released. This completes Ali Smith's seasonal cycle of books that began with Autumn (2016), followed by Winter (2017), Spring (2019), and now Summer. Each of the books stands alone but it seems to me that reading them is enriched by reading them in the order that they were produced. Each story is of the time in which it was released and one can follow the progress of ideas and, to an extent, the progress (or lack of it) of western civilization in the narratives. Thus, we get, in Autumn, the Brexit vote; in Winter, Trump's election; in Spring, the issue of border barriers being erected to deter immigrants; and finally in Summer, the pandemic and resultant lockdown. This book also includes some of the social unrest caused by the endemic racism of our society. For instance, there is a brief reference to George Floyd and the demonstrations that followed his murder by the police, but those parts seem rushed and a bit out of sync with the rest of the book, and no doubt they were added late in the process.

This book, like all the others in the series, has its own set of characters but there are also carryovers and connections to the other books. The main character connection here is Daniel from Autumn, but it also includes some other characters. Each of the books has parallels to a decade in the twentieth century and in this case, it is the 1940s. Daniel, who is now 104, gives us the experience of an internment camp on the Isle of Man where German refugees and English residents with German or Italian ancestry were kept during the war and we can see that resonance with our current lockdown, a kind of voluntary internment. A big chunk of this book, in fact, deals with the events of World War II and the 1940s. Smith obviously sees a parallel between the global cataclysm that was that world war and the cataclysm of the pandemic.

The main characters, introduced in this volume, are Grace Greenlaw, a single mother and former actress, and her two children, Sacha, a 16-year-old environmentalist, and Robert, a very intelligent, inquisitive, and somewhat antagonistic 13-year-old. When Grace and her husband Jeff separated, he didn't go far; he now lives next door with his new wife Angela. Grace and her kids are visited by Arthur and Charlotte from Winter who are doing an online project called "Art in Nature." The two go to the nursing home to interview Daniel where Elisabeth (from Autumn) still comes to read to him. All of these encounters entail erudite and witty conversations. There is enough wordplay and subtle humor here to satisfy the most perspicacious reader.

As in all the books, this one features a connection to a little-known female artist. This time it is Lorenza Mazzetti, an Italian and post-war immigrant to England who was a filmmaker. (Mazzetti also had a familial connection to Albert Einstein with whom Robert Greenlaw is obsessed.) The three artists featured in previous books had all had untimely and tragic deaths, but Mazzetti lived to age 92 and only died in January of this year.

Readers who like a lot of action in their novels would not tolerate Smith's season novels well. Not much happens in them. Instead, they are marked by the characters' conversations that discuss what is going on or has gone on in the world as they try to make sense of it all. I'm fine with that in general but it did seem to me that this one slumped a bit in the middle and lost some momentum. Plus, there was quite a long section about all the means of torture that men have devised to inflict upon their fellow men. That was hard to take and I really didn't see its point of its inclusion. Also, as I noted earlier, parts of the book felt rushed and a bit discordant. Those nitpicks aside, it is still an exceptional piece of writing, and the seasons, taken as a whole, are truly a remarkable achievement that should stand the test of time.