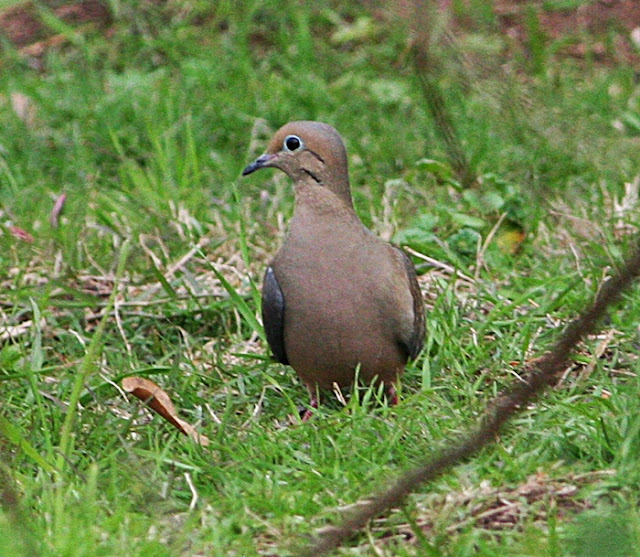 Mourning Dove - always a favorite of mine. As a child, I would wake up to the sound of their calls which I never thought of as mournful. To me, they sounded welcoming. They still do.
*~*~*~*
The environment lost a staunch friend with the death of Justice Ruth Bader Ginsburg. Politico has a look at her environmental legacy.
*~*~*~*
Our current government could not by any stretch of the imagination be called a friend of the environment. The rollbacks of protections that they plan could add 1.8 billion tons of greenhouse gases over a period of fifteen years.
*~*~*~*
The cause of the mass die-off of elephants in Botswana that I reported on a couple of weeks ago has been identified. The elephants had ingested deadly toxins produced by bacteria at the waterholes that they frequent. At least 350 animals died in the Okavango delta this summer.
*~*~*~*
The Winter Finch Forecast is out and forecasters are predicting quite a bit of movement by birds of the boreal forest this winter. Most of the cone crops did not have a good year and that may drive the birds farther south in search of food, a boon for birders in the United States.
*~*~*~*
Decades of a growing crisis in the climate and failure to act to ameliorate it are now locked into the global ecosystem and cannot be reversed, according to scientists in the field. How bad it will get depends on what we do next.
*~*~*~*
The current administration is moving forward with its plan to open up Tongass National Forest to logging. Tongass, located in Alaska, is America's largest national forest and is beloved by environmentalists, Alaskan tribal nations, and fishermen, all of whom will be fighting in court to stop the plans. In a state where the political races look to be quite close this year, it is possible that this could have an impact on the election.
*~*~*~* 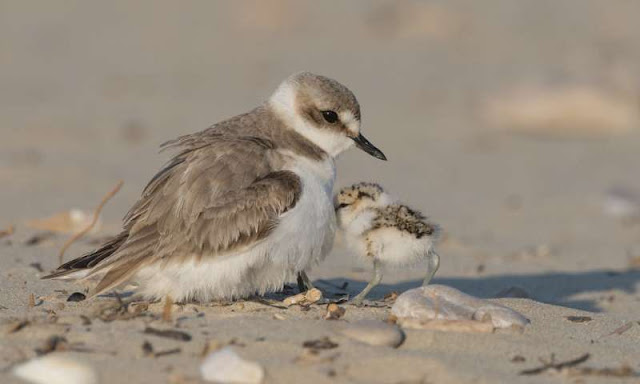 Shorebirds like this one that have had a successful nesting season are more likely to nest again with a new mate, according to a new study. Unsuccessful nesters are less likely to nest again.
*~*~*~*
The western Joshua tree is on track to become the first plant species to be given the protection of the California Endangered Species Act primarily because of a climate crisis-related threat.
*~*~*~*
The Atlantic white cedar bogs of the New Jersey Pinelands are becoming ghost forests as the trees are being killed by the rise of saltwater.
*~*~*~*
Other than migration, there are two significant events in a bird's year: (1.) nesting and (2) molting. Migratory birds usually return to the same area year after year for nesting, but they do not have the same fidelity to the area where they complete their molt.
*~*~*~* 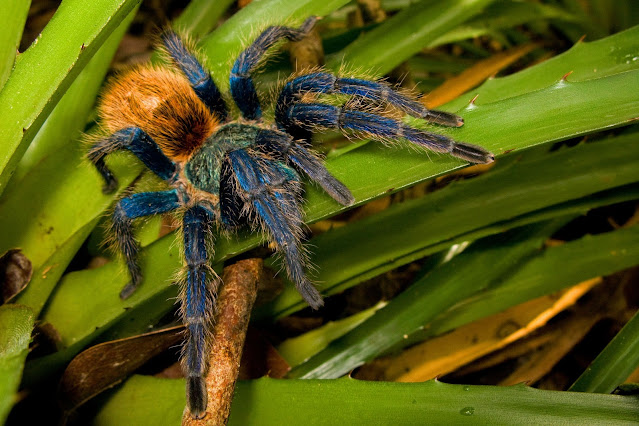 How do you feel about spiders? I hope you are of the same opinion as me, which is that spiders are our friends and allies. And some of them are quite fascinating. One of those is the tarantula, such as the greenbottle blue tarantula of Venezuela pictured above. Tarantulas were long thought to be colorblind but we've now learned they are able to see colors.
*~*~*~*
Tasmania's Macquarie Harbor was a scene of horror as more than 400 pilot whales beached themselves on a sand bar there. Some were able to be released but at least 380 of the animals died.
*~*~*~* 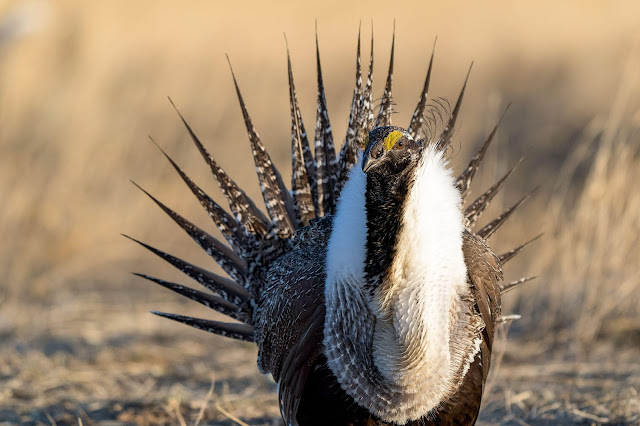 Five years ago an agreement was made to protect the habitat of the Greater Sage-Grouse, but environmentalists are frustrated because they say the federal government has not lived up to its responsibilities under the agreement.
*~*~*~*
A research team has found levels of lichen diversity in Alaska's coastal rainforest that rival the tropics. In Alaska's Glacier Bay National Park and Preserve they identified 947 different species of lichen.
*~*~*~*
The presently constituted Environmental Protection Agency has rejected the findings of its own scientists that the pesticide chlorpyrifos harms children's brains and can stunt development. They did this so they would not be forced to regulate the pesticide. The administration has determined to give less weight to scientific studies that it doesn't agree with.
*~*~*~*
It's not only our own western states that are burning. The Pantanal region of Brazil has more than 3,600 fires burning that are putting the region's Indigenous communities and its unique wildlife at risk, not to mention the tropical forests that serve as a carbon sink.
*~*~*~*
The Andean Condor is another bird species that is threatened by poisoning, hunting, and loss of habitat, but one pair of the birds in Ecuador has been uniquely successful in raising chicks and increasing the population. In the past seven years, the pair has raised seven chicks, whereas most of the monogamous birds only produce a chick every two to three years.
*~*~*~*
When you think of deserts, I'll bet you don't imagine shrimp living there, but in Iran's Dasht-e Lut Desert, when the spring rains come, the ground comes alive with tiny upside-down crustaceans that call the desert home.
weekly roundup