The Vanishing Half by Brit Bennett: A review 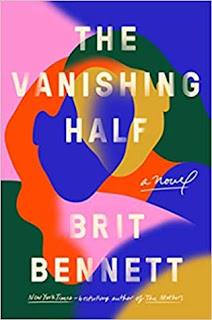 I have read so many glowing reviews of this book by my fellow bloggers this year, and now I read that it has been long-listed for the National Book Award for Fiction. So it was time for me to finally read the book and find out what all the shouting was about.
As all the reading world is probably aware by now, the book tells the story of twin girls, light-skinned African-Americans, who grew up in the little dusty town of Mallard, Louisiana, two hours north of New Orleans. The town of Mallard was founded by light-skinned African-Americans and had remained an enclave of their descendants through the years. Families had intermarried and their children had become lighter and lighter in skin tone until they could easily pass as White.
The twins were Estelle (called Stella) and Desiree. The light skin of their family had proved no protection when their father was dragged out of their house one night by five white men and lynched. The twins, who were only small girls at the time, witnessed the attack. Their father actually survived the attack and was taken to the hospital. When his attackers learned that, they went to the hospital and shot him in his bed. Of course, no one was ever prosecuted for the murder.
This left their mother, who was the housekeeper for a White family, as the only support for the family. Life was a struggle and when the girls were sixteen, their mother insisted they leave school and go to work. This was a particular blow to Stella who had a dream of going to college and studying math. Desiree, who was the more outgoing of the two, made a plan to run away to New Orleans, and Stella, who had never been separated from her sister, chose to go with her.
It was in New Orleans that their lives diverged. Stella was able to get an office job as a secretary by pretending to be White. Desiree worked in a laundry. Stella fell in love with her boss and he with her. When his job took him to Boston, she went along and eventually they married and moved to California. Desiree, on the other hand, married the darkest man she could find. He was a lawyer and they lived in Washington, D.C. where Desiree got a job with the FBI as a fingerprint analyst. (This was back in the 1950s when such analyses were still done by humans.)
Stella's marriage proved to be stable and relatively happy. They had a daughter who grew up to be a flighty blonde actress who was completely ignorant, as was her father, of Stella's racial background. Desiree's marriage ended unhappily. Her husband proved to be abusive toward her and their daughter, Jude. One night when she'd had enough, still bearing bruises on her throat from his abuse, she took her young daughter and ran. She had nowhere to run to except home and so she took her "blue-black" skinned daughter and went back to her mother's house in Mallard. The time was 1968.
Desiree's husband tried to find her. He hired an investigator from New Orleans to look, but it turned out to be someone who had once had a crush on the teenaged Desiree. He refused to give her up, telling the husband he couldn't find her and saying he thought she had gone somewhere out west.
Jude had a difficult time growing up in Mallard. The residents were prejudiced against her because of her black skin and the children were cruel to her.  But she was whip-smart and a good athlete. She was a star runner in track and field and after high school was offered a scholarship to UCLA. At a party where she is working as a server, she meets her cousin, although she doesn't realize it at first. Then a woman arrives who looks just like her mother and she understands who the two women are.
As I read this book, I kept thinking of that old movie from the '50s called "Imitation of Life." It, too, tells of a woman passing for White. In fact, this whole storyline of "passing" seems to have quite a rich history in American literature and the visual arts, possibly because of the American obsession with racial identity. It's a theme that has come up time and again and almost always the stories end in tragedy. The person who is "passing" (usually a woman) is found out and ruined. Brit Bennett had an entirely different approach. Stella pays no price for her deception, other than the fact that she lost her mother and twin sister by turning her back on them. And even then, there is a kind of reconciliation in the end.
As for the two cousins, they eventually acknowledge their relationship and in all this wide country, they continue to bump into each other, the blonde one pursuing her acting career and the dark one going to medical school. (Coincidence does play a significant and somewhat unbelievable role in the story.) Moreover, Bennett never delves too deeply into the psychology of her characters. The narrative stays on the surface of things which gives it a rather flat feeling. That, I felt, was a weakness in the story. But a strong point was in her evocation of the town of Mallard with its own strict biases about skin color and the silences and secrets in family relationships. On the whole, my conclusion was that the book deserves the praise it has received.
My rating: 4 of 5 stars
books Brit Bennett reading reviews