The Darkest Evening by Ann Cleeves: A review 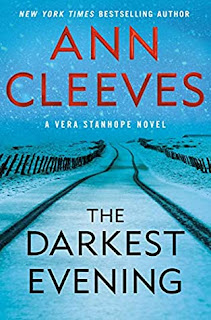 "My little horse must think it queer
To stop without a farmhouse near
Between the woods and frozen lake
The darkest evening of the year..."
- Excerpt from Stopping By Woods on a Snowy Evening by Robert Frost

The evenings are dark and sometimes stormy in Ann Cleeves' latest entry in her DI Vera Stanhope series. And snowy. Very, very snowy.

On the first snowy evening of winter, in blizzard conditions, Vera starts driving home in her ancient Range Rover. She is on a familiar road, but in practically zero visibility, she becomes disoriented and takes a wrong turn. She comes upon an abandoned car pulled off the road with the door standing open and stops to investigate. There is no driver around, but she deduces from the position of the seat that the driver was a short woman. Then a cry from the back seat leads her to discover a toddler strapped into his car seat. Finding no one around, she takes the child and continues on the road which she now recognizes as leading to an estate called Brockburn. It is the family home of the Stanhopes, the place where her father, Hector, grew up. She arrives at the big house to find a Christmas party in progress. She takes the youngster in to be cared for and alerts her office about the abandoned car and possibly a lost motorist in need of help. But soon, the mystery of the missing motorist is solved when a neighbor on a tractor arrives and reports he has found the body of a woman on the road. An examination of the body reveals that the woman was bashed over the head. Murder. Vera calls in her team to handle the investigation.

The investigation reveals some of Vera's family's history as well as the insular atmosphere of the village where everybody knows everybody. The dead woman was a single mother and the daughter of a couple who lives on the Brockburn estate. There had been much gossip about who was the father of her child, a name she had never revealed. Is this somehow related to her murder?

Part of the pleasure of reading mysteries for me is being able to match wits with the detective, and, after so much experience of reading hundreds, maybe thousands of mysteries over the years, I flatter myself that I'm a pretty good armchair detective. Often I can identify the culprit before he or she is revealed in the denouement. Not with a Cleeves mystery though. This is the ninth book in the series. I have read them all now in order and I am 0 for 9; Vera wins every time. This time I actually did have the eventually revealed perpetrator as one of my suspects, but I wasn't able to zero in. Cleeves is really good at hiding her clues in plain sight.

I don't mind losing to Vera though. She is the master detective. Her sergeant Joe calls her the best detective he's ever met and she prides herself on having the best team - Holly, Charlie, and Joe. It is a pleasure to watch them work, gathering information bit by bit, and presenting it to Vera until finally she pieces it all together and shows them and us the whole picture.

If you are in the market for a beautifully written, atmospheric (Northumberland) mystery that is tightly and expertly plotted and has characters that you can identify with and root for, you could do worse than to pick up a Vera Stanhope mystery. If you do though, be sure to read them in order. You don't want to deprive yourself of any pleasure.