W is for Wasted by Sue Grafton: A review 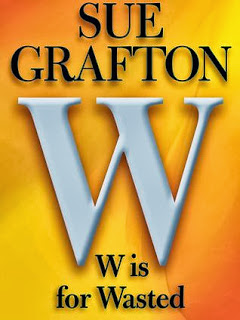 The first few pages of this new Sue Grafton book grabbed me, and I looked forward to one of her typically interesting and entertaining reads. But the further I progressed with my reading, the more antsy I got. The story just didn't seem very coherent. It wandered here and there to no discernible purpose. Words, sentences, whole paragraphs seemed thrown in just to increase the word count and didn't appear to this reader to be advancing the story or making the characters' actions more explicable. In the end, I concluded that W is for wordy. Too wordy by far.

I've been reading these Kinsey Millhone adventures ever since A is for Alibi and, on the whole, I've always found them gripping, and, by now, Kinsey seems like an old friend. So, I was very sorry to feel somewhat disappointed and let down by this latest entry.

The story here revolves around the issue of homelessness as exemplified by the homeless population of Santa Teresa, Kinsey's home town. She becomes involved when a homeless man dies one night, of apparently natural causes, in his sleeping bag on the beach. At the morgue, it is discovered that he had a slip of paper in his pocket that had Kinsey's name and phone number on it. There is no other identification, so the coroner calls Kinsey thinking that she might be able to identify him. She dutifully goes to view the body, but she's never seen him before and has no idea why he had her name in his pocket.

Though she was unable to identify him, she is intrigued by the mystery of his identity and decides to investigate further. She finds some of his friends among the homeless community and finally learns his full name. She's then able to trace his sad history and learns that he was convicted and imprisoned for many years for a crime he did not commit. Finally exonerated and released, he visits his three children in Bakersfield only to be rejected by them. He had a favorite uncle who once lived in Santa Teresa and so he comes there, hoping to find relatives.

And guess what relative he turns up? Yep, it seems that Kinsey is a cousin. Although he had never had a chance to contact her, it turns out he had, surprisingly, made a will leaving her all his worldly goods.

His wrongful imprisonment had brought him a settlement of some $600,000 from the state of California and very little of it has been spent. It looks like Kinsey's days of living from paycheck to paycheck may finally be over.

A few weeks before this death, a shady private investigator named Pete Wolinsky was shot and killed in a bird refuge in Santa Teresa. It looked like a robbery gone wrong, but there were no witnesses and few clues and the police were making little headway in their investigation.

On the surface, these two deaths seemed totally unrelated but as Kinsey dug deeper into the mystery of the homeless man on the beach, she began to discover some strange linkages. And one of those linkages involves a medical researcher who may have been involved in some way with both of the dead men.

It becomes a complicated tale of misunderstandings, betrayals, and, ultimately, outright fraud. And Kinsey finds herself right in the middle of it.

In a long series like this, it is natural to have some ups and downs in the story-telling, and especially near the end of the run, it's easy to see how the writer might run out of steam a bit or perhaps get a little bored with her character. It may be unfair to cast such aspersions on Grafton's work, but, truly, this entry did not meet the standards that I've come to expect from her.

We've still got X, Y, and Z to go. Here's hoping the author gets her mojo back for that final trio of alphabet mystery books.