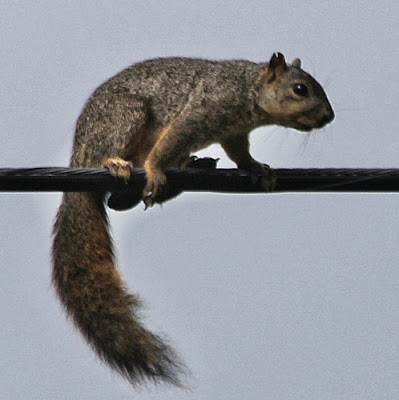 The utility wire that runs over the back of our property is a highway for the Eastern Fox Squirrels (Sciurus niger) that populate my yard. These extraordinarily nimble, agile climbers are able to use the wires to make their way around the neighborhood, even when there isn't a conveniently placed tree. Trees, of course, are their favorite ways of getting from place to place.

The fox squirrel is the largest tree squirrel in North America, bigger than the American Red Squirrel and Eastern Gray Squirrel both of which are sometimes mistaken for this squirrel. It can found over most of the eastern and central United States, west to the Dakotas and Colorado, but is generally not present in New England and most of New Jersey, as well as western New York and northern and eastern Pennsylvania. It can, however, be found as far north as southern Canada and as far south as northern Mexico.

These squirrels live in deciduous and mixed forests and can even be found in cypress and mangrove swamps. They like to dine on many kinds of nuts from those trees, especially acorns, hickory, walnut, beech, mulberry, and hawthorne seeds. They also will eat green shoots and buds, fruits, berries, corn, and insects. They will store nuts for their winter use. They later locate those stores by their keen sense of smell.

Foxy can mate at any time during the year, although their mating frenzy in my yard seems to reach its peak around December. About 45 days after a successful mating, the female gives birth to two to four young, usually in a nest in a hollow tree. If they can't find an appropriate hole in a tree, they will build a leaf nest in a fork of the tree. The young are weaned when they are about eight weeks old and become independent by the age of three months.

Although they are usually solitary animals, I often will see four or five of the squirrels feeding peaceably together in my yard. They feed on the acorns and on birdseeds fallen from my feeders. I also have a squirrel feeder in my front yard, although I am not diligent about keeping it filled and, in fact, it has been empty for a while. It doesn't seem to have bothered "my" squirrels who all look sleek and well-fed. 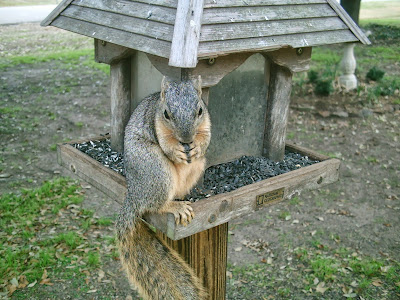 Squirrels, of course, adore sunflower seeds and other birdseeds and they will steal from the feeders if they can. I used to have quite a battle with the critters who stole from this feeder in my front yard. Several of them would descend on the site and empty the feeder of seeds in short order. Since I invested in a "squirrel baffle" for the post, that has ceased to be a problem.

Eastern Fox Squirrels can be gregarious and playful and often seem to enjoy chasing each other around and up and down trees. They also have an extensive vocabulary, some of which I've learned to interpret. For example, I understand their warning, "Look out! There's a cat!" There's also a distinct sound they make when there's a hawk in the area. Plus, there's just a lot of chattering that they do back and forth, maybe gossiping about their neighbors or discussing the weather. They are, in fact, great fun to observe and are among my favorite backyard critters.
Eastern Fox Squirrel