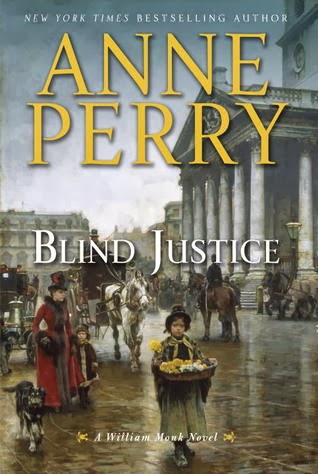 Anne Perry's William and Hester Monk series is another long-running mystery series that I have read faithfully and with enjoyment over the years. In recent years, it has lost some of its spark and freshness, but it has still been of interest for Perry's unique understanding and exploration of the social ills of the Victorian era in England. This most recent entry, however, just seems stale and repetitive. I couldn't find much to excite my interest.

Over the years, we've come to thoroughly know the haunted but ultimately honorable Inspector Monk and his compassionate wife, the nurse Hester. We also know well their friend Oliver Rathbone, the brilliant barrister, now elevated to the bench. Rathbone takes center stage in Blind Justice.

Rathbone has only recently become a judge and he has presided over his first case with his usual brilliance. Now he is tasked with a much more difficult case, that of a charismatic minister who is adored by his congregation but who stands accused of corruption and fraud which ruined the lives of many of his parishioners. He had urged these people to give him their money, even when they couldn't really afford to give it. That money was supposedly to be used to aid those who were less fortunate. In fact, most of it seems to have gone into financing a lavish lifestyle for him and his family. (Seems like a story taken from the pages of a modern newspaper, doesn't it?)

The trial appears to be proceeding toward a just outcome. Then, the defense calls a witness, an associate of the minister's, who casts aspersions on and causes doubt about the motives of all those who have testified against the minister. Indeed, he makes them look like fools.

Rathbone becomes aware that he knows something about this witness - something that would call all of his testimony into question. He knows where there is evidence, safely locked away, that could aid the prosecution and help them to overturn the defense witness's statements. Should he give that evidence to the prosecution? Should he recuse himself from the case, even with the knowledge that the prosecution will probably not be able to bring the case again? What is a judge to do when the ethics of his profession and the cause of simple justice conflict? The decision that Rathbone makes is at the heart of this story.

That decision gets him into deep trouble and he needs the help of his friends, William and Hester Monk, to find evidence to extricate him from the difficulties in which he finds himself. Of course, the loyal Monks, as well as their foster child whom they have saved from a life on the streets, are up for the task.

The germ of the idea for this story and its basic outline held promise, but in the execution of the story, Anne Perry again spends, in my opinion, too much time telling us over and over again, ad nauseum, about what upstanding, moral, exemplary citizens William and Hester are and how they have suffered and overcome obstacles, how they are so admired and loved by their friends and associates. I understand that for some people who may be coming to this series for the first time, exposition of the history of the characters is perhaps a necessary thing, but shouldn't once be enough? Is is really necessary to spend page after page throughout the plot revisiting this history? Well, it wasn't necessary for me anyway, and I admit I skipped over some such passages just because I didn't want to read again about how noble these characters are.

I have long admired Perry for her ability to bring the Victorian era to life, particularly in her explication of the inequality which women suffered and the abuse which was often visited upon children. She has always been especially eloquent about the poorest of the poor and the agonies and humiliations which they often endured in an essentially unjust society. But incessant repetition of even heinous examples can reduce one's sensitivity and begin to dull the impulse to empathy. I am afraid that is what's happening to me with these books. Yes, I agree, child abuse is terrible. Sexual exploitation of children is horrific and I certainly don't wish to become inured to it. But there is a sameness to these stories by Perry that makes it harder to react with fresh outrage with each retelling of the tale. I think perhaps it is time for me to move on to something else on my reading list.