The Kingmaker's Daughter by Philippa Gregory: A review 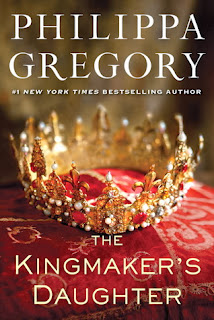 Philippa Gregory's tales about the women of the Cousins' War (or War of the Roses as it later came to be known) continues with this fourth in the series, The Kingmaker's Daughter.

The kingmaker referred to was Richard Neville, Earl of Warwick, whose prowess on the battlefield and in the political arena made him one of the most powerful men in fifteenth-century England. He cast his lot with the Yorks in the internecine war and helped them to gain the throne, but, always, his main aim was to put his own family on that throne. He did not have any sons and so his two daughters were used as his pawns in his political ploys to achieve greatness for his family.

Those two daughters were Anne and Isabel and, of course, the only use for daughters was to get them married advantageously. Meantime, he was successful in getting the York son, Edward, onto the throne where he became Edward IV. Warwick's plan was that he would be the power behind the throne, that he would in all except title be the king of England. Unfortunately for him, Edward did not prove an amenable subject for his machinations, primarily because of his queen, Elizabeth Woodville, who became in fact the power behind the throne and advanced her own family into positions of power, wealth, and influence.

Edward had two brothers, George and Richard, and as Warwick became disenchanted with the king, he schemed to replace him with his brother George. After he first got George married to his daughter Isabel. Again, his best laid plans went awry, when, on the battlefield, George abandoned Warwick and again joined his brother, the king.

The kingmaker's backup plan was to marry his younger daughter Anne advantageously and pave the way for her to attain the throne. He turned his coat and allied himself with the Lancasters for this purpose. Anne was married to a Lancaster, but, on the battlefield, with the Lancastrian forces arrayed against the York brothers, both the kingmaker and his Lancaster son-in-law were killed, leaving Anne fatherless and a widow of barely sixteen.

After this debacle, Anne's mother is in sanctuary and her sister Isabel is married to the enemy (George). But then her fortunes turn when she is discovered and courted by her childhood friend, Richard, Duke of Gloucester, Edward IV's youngest brother. They marry secretly for love and that marriage puts Anne on a collision course with the powerful queen and her family.

The rest of the story follows the well-known series of events mined so successfully by Shakespeare in his plays about that period. ("Now is the winter of our discontent made glorious summer by this sun of York...")

Gregory, as always, tells her story from a woman's perspective, in this case Anne, the younger daughter, whom we meet as a delightful child of eight and watch her progress to finally sit on the throne when Edward dies, George is executed as a traitor, and Richard, the loyal brother and Anne's husband, finally finds himself in a position of power from which he takes the throne, ousting the powerful Elizabeth Woodville and imprisoning her two sons, his nephews, in the Tower of London. But the crown sits uneasily on Anne's head. She has come to believe that Elizabeth Woodville is a witch and that she has cursed Anne and her family because Anne's father had executed Elizabeth's father and brother. Anne becomes more and more paranoid in this belief and, indeed, certain things which happen in her life do seem to give her some evidence for her fears.

The writer weaves all of the known historical facts, along with her own imaginings of what happened, and comes up with a plausible and intriguing take on the characters and the events of this turbulent period in English history. In this telling, both Anne and her husband, Richard III, come across as sympathetic characters who were just trying to do the best for England and save it from bad rulers.

Gregory's style of writing can sometimes be rather turgid, but I found that this book flowed agreeably in the telling and I was never bored. It was a good read.