I was sitting on my backyard bench by the pond over the weekend with my camera in my hands because I was trying - unsuccessfully as it turned out - to get some pictures of a red dragonfly. Then, Fate brought me another subject for my photography efforts. A tiny butterfly landed in the grass near my feet and I aimed the camera at it and snapped.

When I looked at the picture later, I realized that it was a butterfly I had never seen before. Actually, it was so small, with a wingspread of perhaps an inch, that it is possible I had seen it before and had simply not noticed it.

That's often the case of some of the tiny butterflies. We are distracted by the Monarchs and the various swallowtails, all large and showy butterflies that grab our attention, and we forget to notice some of the smaller treasures that are right there under our noses. 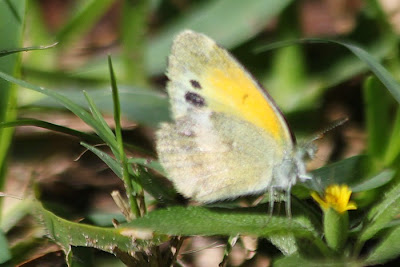 The Dainty Sulphur certainly qualifies as one of those treasures. It is a pretty little butterfly and the smallest of the family of butterflies known as whites and sulphurs, In fact, it is so distinctive and different from other sulphurs that some taxonomists believe it should be accorded a separate subfamily of its own.

This butterfly is a year-round resident from Guatemala and the West Indies northward to Florida and the southwestern states, including Texas. Its preferred habitat is dry, open areas such as weedy fields and sandy coastal flats. It flies just a few inches above the ground and nectars from a number of different flowers, especially those in the aster family. Congregations of the little butterflies can sometimes be found at mud puddles or on patches of damp sand.

Surprisingly perhaps, this tiny critter is migratory, except for the population in Florida which appears, for unknown reasons, not to migrate. The butterflies expand their range northward during the summer months, pressing on all the way to the northern tier of states where they perish in the winter cold. The next year the northward journey begins all over again.

The caterpillars of the butterfly feed on a variety plants, mainly members of the aster family.

The Dainty Sulphur is present in my area throughout much of the year. Now that I've made its acquaintance, I will be on the lookout for it in the future.
Dainty Sulphur butterfly Nature