The Price of Darkness by Graham Hurley: A review 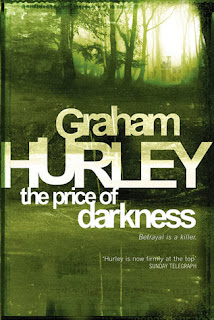 Graham Hurley is a very effective writer of police procedurals. He has a sure feel for the way that police officers think and operate and a succinct method of writing about those things that brings them vividly to life.

The setting for Hurley's Faraday/Winter novels is the island city of Portsmouth off England's south coast and its nearby rival city of Southampton. The city is known to locals by the affectionate nickname of Pompey and that is the name that is often used throughout the novels, especially in those sections that are told from DC Winter's viewpoint. It is a city that has a seafaring history - and present - and is mad about its football team. The city and its surrounding area are major characters in these stories. One can't imagine them happening anywhere else.

Throughout the Faraday/Winter series, a recurring character has been the local crime lord Bazza Mackenzie. The police have tried repeatedly to bring him down but have been notably unsuccessful. A kind of grudging respect has grown up over the years between Mackenzie and DC Paul Winter. They can sometimes be found down at the local pub, having a pint together.

As this book opens, we find that that respect has blossomed. Winter, always the iconoclast and outsider, has finally committed one infraction too many and has been kicked off the police force, the only life he has ever known as an adult and the only thing he is really good at. Soon after being cashiered, he was offered a job by Bazza Mackenzie and he took it! It appears that he has gone all the way over to the dark side. Or has he?

Meantime, DI Faraday and the Portsmouth police are investigating the murder of a high-profile local property developer. The murder was accomplished with meticulous planning with virtually no clues being left behind.

Only a few days later, another murder occurs. This one looks like a political assassination, possibly a terrorist action. A low-level government minister is shot in the head while his car is stuck in a traffic jam. The shooter was riding pillion on a motorcycle which was then able to make its escape.

The two murders appear to be unrelated and are investigated on two different tracks by different teams, but as Faraday and his team investigating the property developer's death dig deeper, they begin to find some troubling connections which lead them to think that perhaps the two are somehow related. But how, exactly? Putting the pieces of the puzzle together is never easy.

It comes as no surprise really when we learn at length that the whole story of drumming Winter out of the police has been a set up. In fact, he has gone undercover to try to infiltrate Mackenzie's organization. But once in that organization, he finds a level of respect and indeed affection for him that he never found with the police. He then finds that his "handlers" with the police have not been especially forthcoming and truthful with him about just what his stint as an undercover agent will mean to his career. All of which makes Winter begin to wonder if perhaps the best career choice for him is to throw in with Mackenzie for real.

The investigation of the two murders eventually uncovers a heartbreaking tale of personal and political betrayal which will be all too familiar to readers who are aware of the economic realities of the bloodthirsty way that big businesses often work in today's society. The Price of Darkness is at its heart a study of the desperate measures that some people will take when society and the institutions they have depended on let them down.

Graham Hurley weaves a modern tale that seems torn from today's news stories. It's a story with which many of us will empathize. Unfortunately, in the end, he leaves a lot of loose ends. Many of the issues raised in Faraday's personal life are left unresolved, as is Paul Winter's status. At the end, we are left believing as we did at the start of the story that Winter has fully signed on to the Mackenzie regime. But is that really true? I guess we'll just have to read the next book to find out for sure.