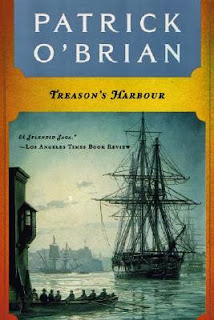 We last visited with Patrick O'Brian's creations Jack Aubrey and Stephen Maturin in The Ionian Mission during which they spent an interminable amount of time in a blockade off Toulon. It was a boring assignment for Aubrey/Maturin and crew and somewhat boring for the reader, as well. Now, the action picks up again in Treason's Harbour, the ninth entry in the series.

This tale is set mostly in and around Malta, which turns out to be a veritable hotbed of intrigue. Half the population seems to be spying on the other half and nobody is to be trusted.

Spying, gathering intelligence, is, of course, the purview of Dr. Stephen Maturin, ship's surgeon and erstwhile biologist. Malta is both a Mecca and a nightmare for him. When his ship is sent on what turns out to be a wild goose chase that is meant to lead them into a deadly trap, it becomes apparent that the admiralty's intelligence network has been compromised. It is only Captain Aubrey's vast experience and naval expertise that allows them to escape the trap unscathed.

Jack and Stephen encounter a beautiful young woman whose husband is a captive of the French. It develops that the French intelligence network is threatening her with having her husband executed if she does not assist them. She is meant to seduce Stephen and gain valuable information from him, but she confesses all of this to Stephen and a counterplot is put into motion - one that will feed false information to the French.

In order to advance their plans, it is important that everyone thinks that Stephen is engaged in an affair with the young woman, which, as it turns out, gives an enormous boost to his reputation and standing among the sailors!

Meanwhile, Jack's main concern is getting repairs made to his ship and hanging on to his hand-picked crew, which other captains are attempting to steal away while the frigate Surprise is stuck in port. While waiting for those repairs and a return to the sea, Aubrey is given the extremely distressing news that this will be the final mission for his beloved Surprise. She is to be sent back to England where she will be decommissioned and broken up. This hits him like a death in the family.

One of the many things that I enjoy about these novels is Dr. Maturin's interest in biology and the environment of all the places which they visit. In particular, he is a keen birder and constantly makes observations of local bird life, both at sea and on land. I was particularly interested to read in this book of their visit to an area where the Purple Gallinule is found and Stephen's interest in seeing it, since, just recently, I went on my on quest for that bird which summers here in Southeast Texas. (And I found it!) It's tidbits like that, rather than all the sailing lore and terminology that is dear to the hearts of many of O'Brian's readers, that truly bring these stories to life for me.

That and the continuing relationship of Maturin and Aubrey are the elements which keep me coming back to continue reading this series. By now, the two of them are like a long-married couple who complement each other's strengths, ameliorate each other's weaknesses, and make allowances for their partner's annoying little habits. Most of all, each knows that he can absolutely depend on the other. In a dangerous world where Napoleon's agents are everywhere, that fact has often been the difference between life and death.

Patrick O'Brian's strengths as a writer include his character development and, of course, his mastery of British naval history and naval terminology. As usual, a lot of that terminology went right over my head and, unlike some readers, I did not feel a compulsion to turn to one of the companion dictionaries to the series to learn the meaning of every single nautical term. Understanding the context seems sufficient for me and I'm able to enjoy the action and follow the flow of the story without necessarily getting every nuance. Maybe that makes me a superficial reader, but I can live with that.