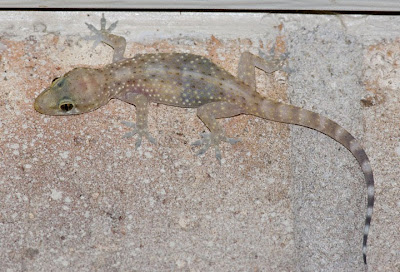 In this part of the world, we are blessed with the presence of several different types of very beneficial little reptiles. I routinely encounter green anoles, garden skinks, as well as small snakes in my garden. They are all welcome here. But one of the most interesting of our small reptiles is not a native but actually an introduced species that has made itself right at home in our area. It is the Mediterranean gecko.

As its name would imply, it is native to the Southern Europe and Northern Africa area. It is adapted well to living in and around homes and has spread to many other parts of the world, including Southeast Texas, and their numbers are apparently increasing. They are insectivores that eat many harmful insects, including cockroaches.

By day, these little lizards usually hide in cracks, crevices, and under tree bark or other such spots. At night, they become most active. They are frequently found near lighted areas, such as windows or entries of houses, where small insects are abundant during warm weather. 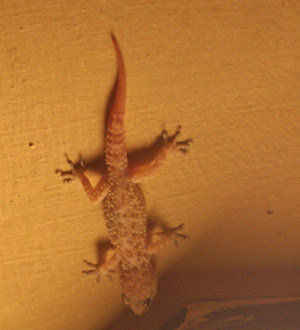 A Mediterranean gecko on the ceiling of my front porch waiting patiently near the light for an unwary insect.

These little lizards remain active during spring, summer, and fall in our area. Like other reptiles, they disappear during the colder months of the year.

One of the interesting things about Mediterranean geckos is that, unlike most reptiles,  they are capable of vocalizing. Males make a call consisting of several clicks and they use vocalizations in territorial disputes and to deter predators.

Another characteristic of geckos which they share with anoles and some other lizards is the ability to cast off their tail as a defense when they are attacked and to regenerate that tail. It takes them about three weeks to grow a new tail.

They have a relatively long breeding period. They breed March through November here. The adult females lay two eggs in a clutch, often in communal nests, and at this time of the year, it is very common to encounter very tiny geckos that look as if they just popped out of one of those eggs. In fact, just recently, I had to rescue such a baby from Bella the cat when the little critter managed to get into the house. I returned him to the outside world where he promptly skittered away to hide.

Mediterranean geckos do have a somewhat odd appearance with their large, unblinking eyes and their bumpy, warty skin. They look like a creature that, much enlarged, you might see in a science fiction movie, playing the "monster that ate Phoenix" or some such role. But they are benign creatures, at least as far as humans are concerned, and great fun to watch. Moreover, they are important helpmates for the organic gardener.