Life After Life by Kate Atkinson: A review 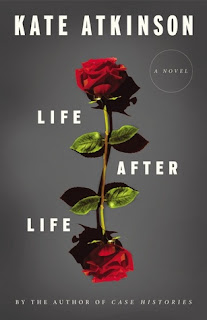 "Am I alive and a reality, or am I but a dream?"  - Edgar Rice Burroughs in The Return of Tarzan

People of a certain age - my age - remember fondly the great television series of 1959-1964, "The Twilight Zone."  Each week it presented stories of a unique vision, stories that could be loosely categorized, as could this book, as science fiction. Indeed, as I read Kate Atkinson's latest marvelous book, Life After Life, I kept thinking that this would have made a great tale for "The Twilight Zone."

Earlier this year, I first met Kate Atkinson through her Jackson Brodie series. I read all four of the books in that series, in which she explored the outer reaches of possibilities of the mystery genre, beginning with Case Histories. In this new book, she seems to be exploring the outer limits of possibilities of science fiction. She imbues the genre with her own unique brand of creativity.

But how to begin to describe this story? Well, it has its beginning on February 11, 1910.

On that date, Ursula Todd is born in a village in England, in a house called Fox Corner. But she is born with the umbilical cord wrapped around her neck and before she can draw her first breath, she is dead.

On February 11, 1910, at Fox Corner, a baby girl is born to Sylvie and Hugh Todd, their third child. She is a healthy, bouncing baby girl and she is named Ursula. She will live a long and eventful life.

Or, when she is a baby, Ursula is smothered by a cat lying on her face while she is in her cradle.

Or, she is saved when her mother shoos the cat away.

Or, when she is four, her older sister Pamela pulls her into deep water while they are on a seaside vacation, and they both drown.

Or, they are both rescued by an onlooker and carried safely back to their mother.

On her sixteenth birthday, Ursula is raped in her home by a loutish friend of her older brother. In her complete innocence, she doesn't really understand what has happened to her and is later surprised to learn she is pregnant. She goes to London and confides in her Aunt Izzie, her father's sister, who arranges for an illegal abortion, which nearly kills Ursula.

Or, on her sixteenth birthday, she shares a chaste kiss with her next door neighbor, Benjamin, a darkly handsome boy on who she has a crush, and afterward they embark on an innocent first love affair.

She goes to Germany as a student, lives with a German family, and meets and befriends a young woman named Eva Braun. She meets Eva's lover, Adolf Hitler, and one day at a cafe, she manages to shoot him, thus changing the course of history.

Or, she tries to shoot him and is herself killed by his companions.

Or, she goes to Germany as a student, lives with a German family, meets a young man and marries him and they have a daughter named Freida. She gives up her English citizenship and becomes a German citizen and as war is approaching and she desperately wants out of Germany and to get back to England and Fox Corner, she finds herself trapped with her daughter. She survives the war, but in 1945, with her husband long dead, her little daughter deathly ill and the Russians on the outskirts of Berlin, she obtains drugs for suicide. She gives them first to her daughter and watches her die and then takes the drugs herself and darkness falls.

Or, she returns home to England after her time as a student in Germany, continues her education and ends up as a civil service employee, where she serves throughout the war years. She also serves in the local brigade which has the task of rescuing living victims caught in the rubble of the blitz and digging out the dead. She has several affairs but never marries and never has a family of her own, but she is devoted to her two younger brothers and her older sister Pamela and her children.

Or, she lives until June 1967 and on the eve of her retirement from the civil service, she takes a walk in the park, sits on a bench lost in her memories and in the pain of a severe headache. And she dies. Or...

And so it goes throughout this book. Alternate lives. Alternate deaths. Not only for Ursula but for those around her. What part is "real" and what part merely a dream or a premonition of something that might have been different? Does it matter?

Or, to put it as Edgar Rice Burroughs did, "Am I alive and a reality, or am I but a dream?"

It is not really possible in a short synopsis to convey the atmosphere of this novel. It is by turns funny and sad, ironic and poignant. For me, perhaps the most poignant and the most revealing part of the book was being able to see the horror and privation of World War II for civilians both in Germany and in England through the eyes and experiences of one character. It is a brilliant and heartbreaking portrait of war, one that only a masterful writer - dare I say a woman writer? - could paint.

Kate Atkinson is a masterful writer and she has written an extraordinary book, one that moved me as few books have. Gillian Flynn, author of Gone Girl, provided a blurb for the book which appears on the front cover. It says, "One of the best novels I've read this century." To which I can only add, "Me, too."