September 04, 2013
I was sitting on my patio just at dusk one afternoon last week when I noticed movement in the big sprawling datura plant next to the patio. 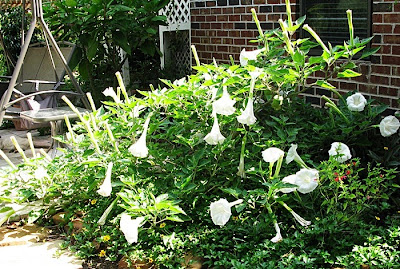 The plant was full of its large, delicately scented white blossoms on this particular afternoon. The blossoms open late in the day and stay open overnight to attract moths and perhaps bats as pollinators. By mid-morning on the next day, they are gone. 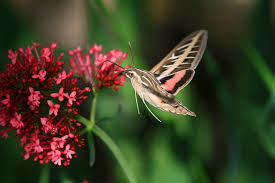 I didn't have my camera and wasn't able to get a picture, but here's an image from the Internet that shows what the critter looks like. Its scientific name is Hemaris thysbe, and it is from the family Sphingidae.  It has a long proboscis that looks somewhat like a hummingbird beak and it hovers like those little birds. It even makes an audible humming noise as it feeds, so it is understandable that the moth is often mistaken for a hummingbird.

It flies during the daylight hours but is particularly active late in the day. It often feeds from night blooming plants like the datura, and the ones that I observe in my yard seem to have a particular affinity for members of the nightshade family.

This interesting moth is found throughout much of the United States. It is a migratory species and is most common in the eastern United States. It has a variable appearance, but the ones that I commonly see in my backyard look like the one in the image above.

Here is a video of the hummingbird moth in action.