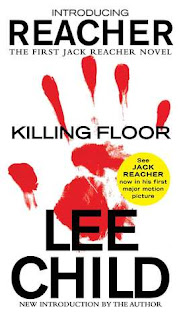 People have been telling me for years that I should read the Jack Reacher series, but I always resisted. One of my Mystery Book Club friends in particular is Reacher's biggest fan and is always proselytizing for the Lee Child series and to have him added to our reading list. She likes her mysteries to be full of blood and guts - the bloodier the better. After reading this first in the Reacher series, I guess I can see why she's such a big fan.

Thinking back over what I've just read, I count thirteen men that Reacher killed over the course of the few days when the action of Killing Floor takes place. I may have missed one or two. When the blood flows so freely, it is really hard to keep track. Of course, they were all truly evil men with no redeeming value to society. But still - thirteen!

The story here, briefly, is that Jack Reacher, six months removed from his Army career, is wandering around the country and has just landed in Margrave, Georgia, a little town that nobody ever heard of but one where an old-time jazz musician that he admires once lived. He's on a quest to look for traces of that musician, but soon after he walks into town, he is arrested for murder. Two men have been shot and one of them has had his body kicked into a bloody pulp after death. Reacher is the outsider so he is the logical target for local cops to pin the deaths on.

The identity of the man who was kicked around is unknown, but when the results of his fingerprints come back from Washington - surprise! - he turns out to be Reacher's older brother, Joe. Joe was with the Treasury Department and as the investigation progresses, it is revealed that he was in Margrave looking into a currency counterfeiting scam.

Margrave at first seems an unlikely spot for the center of such an apparently sophisticated enterprise. It appears to be an idyllic little town, everything modern, up-to-date and spotless. It seems to want for nothing and yet there is no apparent logical basis for the town's success. All of this, it turns out, is due to the largess of a fabulously wealthy local entrepreneur who moved to town some five years before. Hmmm...I wonder who is the head of the counterfeiting ring.

At any rate, something smells dirty to Reacher and he soon determines that the whole town, including much of the police force is corrupt. The only people he can trust are the brand new Harvard-educated chief of detectives, and a smart, scrappy female officer with whom he has an instant sexual attraction. (Reacher is, of course, one of that long line of ruggedly handsome, formidable, indeed indestructible, detectives who are irresistible to beautiful women.)

Lee Child definitely knows his craft. He keeps things moving and keeps the reader turning those pages, even though it seems obvious pretty early on where the source of the town's corruption lies. And I have to say that the Jack Reacher depicted here doesn't seem to have much depth and breadth. He is the perfect killing machine. He kills efficiently and without compunction, with no afterthoughts or regrets.

And, naturally, he is a perfect lover for the woman in his life, but you just know she isn't going to be in his life for very long. This man was born to ramble just like the jazz musicians that he so much admires. No place, no woman can hold him for long.

Of course, this was just the first entry in what has become a very long award-winning series, so I'm guessing (hoping) that Reacher becomes a more fully developed character along the way. I'll definitely be reading more of the books, I think, but not for a while. First, I need to wash the blood out of my mind with some words that are not quite so violent.