How the Light Gets In by Louise Penny: A review 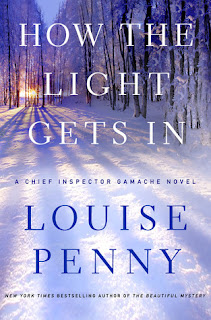 When we last spent time with Chief Inspector Armand Gamache of the Sûreté du Québec, he had just solved The Beautiful Mystery at a remote monastery in Québec. He solved the mystery in spite of interference and obstructionism from his implacable enemy - and boss - Superintendent Sylvain Francoeur.

He solved the mystery but he lost his long-time second-in-command and the man he loves as a son, Jean-Guy Beauvoir. Francoeur had seduced Beauvoir by playing on his physical and psychological pain from an old wound and getting him hooked on prescription drugs, namely Oxycontin. In his mental state, Beauvoir turned against Gamache and Francoeur had transferred him into his own unit and supervision where he could better control him and ensure his downward spiral into the depths of addiction.

As How the Light Gets In opens, Francoeur's sabotage of Gamache has gone even further. He has broken up Gamache's homicide division and all of his carefully trained officers have been transferred away from his command. All except Isabelle Lacoste, who is now his second-in-command.

Gamache's long battle against corruption in his beloved Sûreté seems to be reaching a climax one way or another, but, meantime, murder won't wait.

The Chief Inspector is contacted by one of his friends in the small village of Three Pines, where so many of his cases have been located. Myrna the bookshop owner is concerned about her friend who was supposed to spend Christmas with her but who hasn't shown up and she hasn't been able to reach her by phone. Her instinct tells her that something is very wrong and she asks Gamache to look into it. A trip to the woman's house in Montreal confirms that something is indeed wrong. The woman is dead. Murdered.

The investigation slowly unravels the mystery of the solitary woman's life. It turns out that she wasn't just any anonymous citizen. She was one of the famous Oulette (for which read "Dionne") quintuplets. She had been the last surviving quint. As Gamache and Lacoste do their archaeological dig through the layers of her life, they find a story of ineffable sadness, of children who were never really allowed to be children but were forced to live their lives as national symbols.

Their investigation also reveals some questions about the deaths of some of the other quints. Was the last quint the only one to die at the hands of a murderer, or were there others? Is the answer to the mystery buried somewhere in the troubled past of that family?

As the investigation of the Oulette murder continues, Gamache is also pursuing the main work of his life as a Chief Inspector which is to root out the corruption which is rampant in his agency, to free and cleanse it and make it the agency that it should be - one that serves and protects the public interest. In so doing, he is haunted by a sense of urgency as his instinct tells him that whatever his enemies are planning is about to come to a head and that could mean massive death and destruction for Québec, as he well knows from his thwarting of previous plans by this group.

To again stop the saboteurs, the Chief Inspector gathers together a small team and takes them to Three Pines where he hopes they will be able to escape the notice of Francoeur and his allies. He uses the Oulette investigation as cover for being in this remote village where cell phones don't work and electronic links to the outside world are limited. It is here, among his friends in this peaceful and pleasant little village, that he will make his last stand.

Through eight previous entries in the Armand Gamache series, Louise Penny has taught us to love this unlikely policeman, a policeman for whom kindness to others is his guiding principle. She has also taught us to love his team, the people who are devoted to him without question, people like Isabelle Lacoste and like Jean-Guy Beauvoir used to be. We can feel Gamache's pain at the loss of Beauvoir and his determination to somehow save the younger man, no matter what it takes.

Most of all perhaps, we love the village of Three Pines and its iconic characters: Ruth the irascible poet; Clara the chronically disheveled artist; Myrna the psychologist turned bookshop owner; Gabri and Olivier the B and B/bistro owner/operators; even Rosa the duck who returned; and all the others that we've gotten to know. We've come to look forward to and treasure these days that we spend with all these familiar people. It would be so sad to see these regular visits come to an end. I do hope there will be a tenth Armand Gamache mystery.