September 25, 2013
Autumn is an exciting time for birders, even for a backyard birder like myself. Birds are on the move and have been for several weeks now. All those migratory species that spent their spring and summer raising families in North America, some in the very far northern reaches of the continent, are now on their way south to find their winter ranges in Central and South America.

Fall migration actually starts in late June or early July for some species. Typically, the shorebirds that nest in the far north start wending their way south at this time. But even some of the familiar songbirds begin their fall migration this early. For example, the Purple Martin, which is one of the earliest arrivals among the spring migrants, typically arriving in my area in late January, is one of the earliest to leave. By mid-July, these big swallows, so much a part of the avian sights and sounds in my community for six months, are completely absent.

By late July, early August, I begin seeing migrating Ruby-throated Hummingbirds passing through my yard. It starts as a trickle of a few birds a week and the numbers swell to a flood by this time of year. There is a constant whirl of hummingbird activity in the yard as these pugnacious and extremely territorial little birds battle over nectar feeders and their favorite flowers and shrubs. 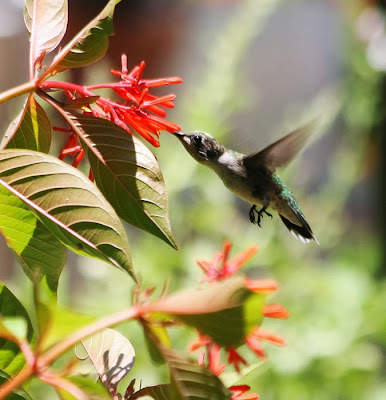 Female Ruby-throated Hummingbird visits the blossoms of the Hamelia patens (hummingbird bush or Mexican firebush) in August of this year. 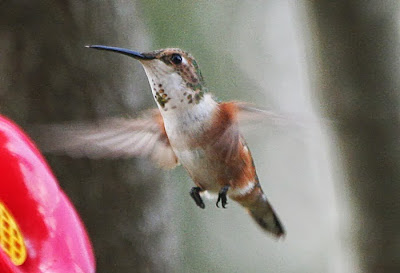 Female Rufous Hummingbird, one of my winter visitors last winter.

By this time of the year, or course, most of the songbirds that are going to migrate are well on their way. These include the rock stars of the songbird world, the warblers. Just last week, I recorded warblers passing through my yard, including a wonderful Wilson's Warbler that I was able to photograph. 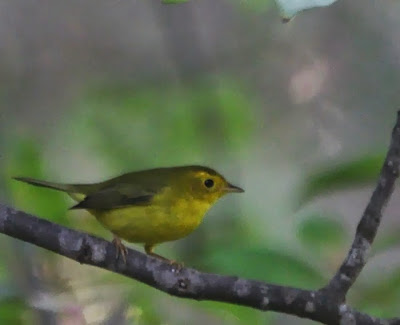 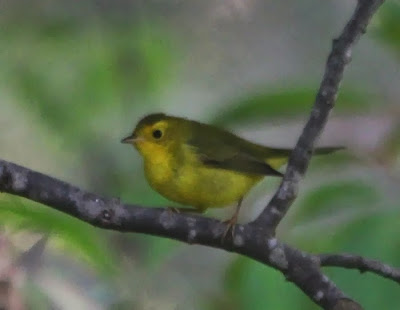 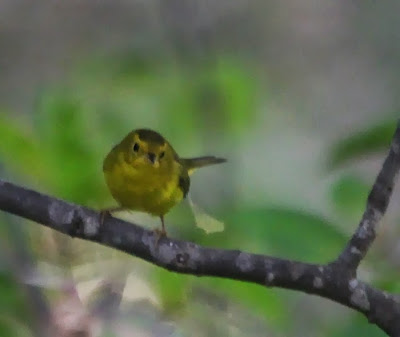 All of these birds have been or soon will be joined by flycatchers, sparrows, finches, and their much larger relatives like raptors, geese, ducks, and cranes. My yard is on the route that is taken by the wild flock of Whooping Cranes that winters on the Texas Coast at Aransas National Wildlife Refuge, but I've never been lucky enough to see any of the big birds passing over. However, I have seen their smaller cousins, the Sandhills, flying over my yard in migration.

Nearly every day now brings a new species to the yard or flying over the yard. You never know what wonders you might see when you walk out that back door in the morning.

But it's not just the birds that bring the excitement. The migratory Monarch butterflies are on the move also, headed toward their winter home in Mexico. The Monarchs have been devastated by loss of habitat and harmful weather events in recent years and their numbers are greatly reduced over what they were even five years ago. Nevertheless, a few of the beauties do show up in my yard at this time of year. It is always a treat to see them. 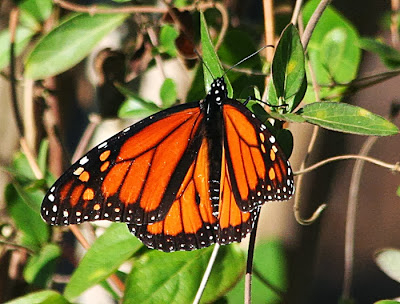 A male Monarch drops in.

Migration is a fascinating and somewhat mysterious event in Nature. It has been extensively studied by scientists and is certainly much better understood today than it has been in the past, but still there is much that is not known about how it works and what triggers it.

Even with the facts and figures which science is able to provide, it still seems to border on the miraculous that a tiny 4.75" long creature like the Wilson's Warbler can fly all the way from northern Canada to South America, thousands of miles, and that it will make the same trip in the opposite direction a few months hence.

Or that a thing as fragile as a butterfly will fly towards a destination which it has never seen, many miles away, guided only by an instinct honed over thousands of years of experience by its ancestors.

Perhaps it is just as well that Nature is able to keep some of her secrets and that we are able to keep our sense of wonder about the phenomenon that is migration.
migration