The Cuckoo's Calling by Robert Galbraith: A review 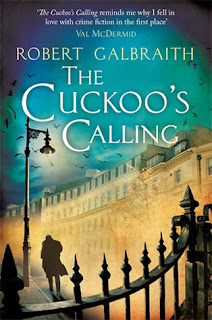 As all the reading world now knows, Robert Galbraith is a pseudonym for J.K. Rowling. I admit I had not heard of the book before the brouhaha broke when that fact was leaked, apparently by someone associated with the law firm representing Rowling.

I went back and read some of the reviews of the book that were published before the true authorship became known and found that most were quite positive. Some even remarked that it was a particularly accomplished effort for a debut novel!

I think I can understand Rowling's decision to publish under a pseudonym in an effort to have the book stand on its own rather than be influenced by readers' preconceptions. The irony, of course, is that the book had very modest sales until it became known that it was a Rowling work. Then it immediately shot to the top of The New York Times Best Seller list. And one of those buyers was me.

I am glad that the book was brought to my attention, even if it was at the sacrifice of Rowling's wish for anonymity. It is an excellent mystery in the classical mode and was a quick and highly entertaining read.

We meet private detective Cormoran Strike at a low point in his life. He had served in the British military in Afghanistan, where he lost the lower part of one leg to a land mine. Back home again, fitted with a prosthetic leg and learning to cope, he has started a private investigation business, but it is failing badly. He has only one client and he is being hounded by creditors.

His long-time rocky relationship with his fiancee, Charlotte, has ended on an acrimonious note and he has been forced to live in his office, sleeping on a camp bed. Could he possibly sink any lower?

Then, two things happen that will change his life. Temporary Solutions, an agency that supplies temporary clerical staff, sends him a secretary named Robin. On the same day that Robin arrives, a new client, John Bristow, shows up.

Bristow wants to engage his services to investigate the death of his sister, a supermodel named Lula Landry, known to her friends as Cuckoo. A few months earlier, Lula had fallen to her death from the balcony of her third-floor flat.

The death was ruled a suicide. Lula had been known to have mental problems. But Bristow doesn't buy it. He believes she was murdered and he hires Cormoran Strike to find the truth.

The search for the truth plunges Strike, aided by his amazingly adept and enthusiastic assistant/secretary Robin, into the world of the multi-million pound beauty business - unbelievably skinny but incredibly beautiful models, rock-star boyfriends, and designers desperate for the services of the models and for the notoriety their escapades can bring to their creations. All of them are unquenchable narcissists, for whom the world revolves around their every whim. Galbraith/Rowling describes their world and their relationships with the knowing eye of one who seems to have observed them at some length.

In Cormoran Strike and Robin, the author has created two enormously appealing characters that the reader can root for unreservedly. They each have overcome obstacles in their lives and they each feel an excitement about the search for the truth that others sometimes misinterpret or do not understand. Robin's fiance, for example.

As Robin's temporary assignment at Strike's detective agency nears an end, both employer and employee are regretful and the reader senses that this isn't really going to be the end of this relationship.

The plot of this story had me completely fooled, I freely admit. I thought I knew whodunit, but I was wrong. At one point during the story, I had briefly entertained the idea that the murderer was the one who, in fact, it turned out to be, but I thought, "No way! The writer would never do that." Little did I know...

So, yes, the book kept me guessing right up until the end and it kept me turning those pages to find out what twist the plot was going to take next.

The Cuckoo's Calling is styled as "Cormoran Strike, #1" so I assume there is going to be a #2, #3, etc. I would certainly hope so. This was a very promising beginning and I look forward to reading more about the adventures of Cormoran and Robin.