The Lady of the Rivers by Philippa Gregory: A review 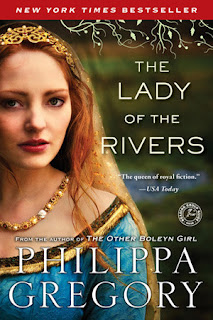 Philippa Gregory has made a very successful writing career by telling the stories of strong women in English history, women whose lives are generally overlooked or devalued by traditional (mostly male) historians. Her most notable successes have been in writing about women of the Tudor period in such books as The Other Boleyn Girl, which was translated into a money-making motion picture.

Most recently, Gregory has taken on the stories of the women of the 15th century Cousins' War, or War of the Roses as we generally think of it today. I had previously read the first two books of that series, The White Queen and The Red Queen and had enjoyed them. This summer, Starz had a series based on The White Queen. I watched a couple of episodes of it, but I can't recommend it; however, watching it piqued my interest once again in this historical era and I decided to read the next book in the series, The Lady of the Rivers.

This book tells the story of Jacquetta Woodville, who was the mother of Elizabeth, the White Queen. Jacquetta was of a Luxembourg family, the female side of which considered itself descended from Melusina, the river goddess. Those descendants were supposedly blessed with second sight, an ability to see into the future and to interpret signs. That ability is a recurring theme throughout Jacquetta's life.

The tale begins with Jacquetta visiting her uncle's household. Her uncle has a prisoner named Joan of Arc. Jacquetta meets her and recognizes in her the same powers which she herself possesses. She sees the young Joan accused of witchcraft because of those powers and watches as she dies a horrific death at the hands of the English rulers in France. From that experience, Jacquetta learns that the world is full of danger for a woman who dares to dream and to seek knowledge. It is a lesson that she will see repeated many times throughout her life.

The young teenaged Jacquetta is married to the Duke of Bedford, English Regent of France, a widower in his forties. He is only interested in her for her supposed second sight and he introduces her to a world of learning and alchemy.

The Duke has a squire named Richard Woodville who becomes Jacquetta's friend and protector and, when the Duke dies, her lover. The two young lovers marry in secret and return to England where they both serve at the court of the young Lancastrian king, Henry VI. Jacquetta becomes a close and trusted friend to his queen, Margaret.

From this point on, the story becomes one of incredible fertility and constant military campaigns.

Over the years, Jacquetta bears some 13 or 14 (I lost count after a while) children, which is a truly remarkable feat considering that she and her husband are almost always separated! He is forever being sent on military missions, usually to France, by the king. He comes home for a few days and when he leaves Jacquetta is pregnant again. The next year, she goes home to their place in the country to deliver her baby, stays a few weeks and then returns to London, to the court, leaving the newborn behind. Amazing.

Henry and Margaret are atrocious rulers, who make enemies on all sides and soon the York side of the family is challenging them for the throne of England. The constant war shifts from France to the English countryside and becomes fratricidal.

Of course, Mantel is and Tuchman was very different kind of writers from the populist Gregory. Gregory is what she is and often that can be quite satisfying, although I found this particular book a bit wanting.

What kept running through my mind repeatedly as I read The Lady of the Rivers was a wish to know more about those anonymous women who raised those 13 or 14 children and kept the household going while Mama was off holding the hand of the queen and Daddy was off swinging his sword. What were their lives like? Did they have families of their own? How did the children left in their care feel about their caretakers? What happened to the caretakers once the children were raised? That's a story that I would be interested to read, but it's probably not one that Philippa Gregory would be interested in writing.