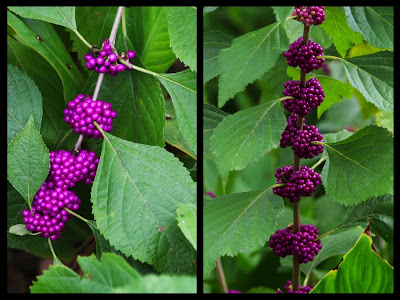 The berries which give beautyberry its name, photographed in my garden this week.

Beautyberry is well-named. Those shiny berries that develop in late summer and early fall on the 3-5 foot tall shrubs are indeed very attractive, both to humans and to birds which love to feast on them.

In fact, I am sure that all the purple-berried beautyberries in my yard were planted by birds - birds who either pooped out the seeds from the berries or dropped them in flight. I do have several of these native shrubs from the verbena family, because, generally, if possible, I just leave them alone and let them grow where they are planted.

Historically, Native Americans made a tea from the leaves and roots of American beautyberry (Callicarpa americana), sometimes called French mulberry, which they used for sweat baths for rheumatism, fevers, and malaria. A root tea was used for dysentery and stomach aches. Root and berry teas were used for colic.

The plant is very valuable in a native plant landscape because it attracts birds and butterflies. In areas where deer are a nuisance, unfortunately, it also attracts them.

For gardeners looking for a carefree shrub to add to their gardens, this could be the answer to their dreams. Once established, it requires virtually no maintenance. The only thing I ever do for mine is to prune them back when they get too big for their space. They can be pruned severely before new growth starts in the spring to control the plant's size, and they can be pruned throughout the growing season if they need to be shaped or the size further controlled. 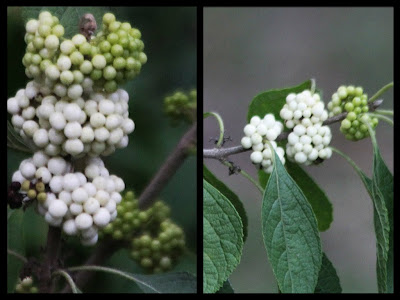 In addition to the more familiar purple-berried plant, there is a white-berried variety which I also have in my garden. The white berries, for whatever reason, seem to be even more attractive to the birds in my yard. They will strip this shrub of its berries before moving on to the purple berries.

The shrubs are deciduous and so are not especially attractive in winter and sometimes during prolonged droughts, as we are prone to have in Texas, they will lose some leaves and the fruit may not develop properly. But, in my backyard, for three seasons of the year, they are an attractive and valuable addition to my habitat garden.
beautyberry Nature