The Lost Kings by Tyrell Johnson: A review 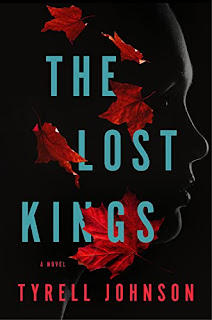 This was a dark, psychological thriller with an interesting twist at the end. Some readers claim they knew it all along. Well, I didn't.
The protagonist is named Jeanie King and she is one messed-up individual. She has a "twin" named Jamie. When she was still a child, she lost her mother in a car accident, after which she was cared for by her aunt and uncle while her father was away in military service. When her father is mustered out of the military, he moves the family to a remote cabin in rural Washington.
The father has plenty of psychological problems of his own. He is an alcoholic who suffers from PTSD and is a seriously neglectful parent. One night he comes home covered in blood. The next morning he and Jamie are gone and Jeanie is left on her own.
Perhaps the only good thing Jeanie has going for her during this period is her friendship with a boy named Maddox. It is a friendship that endures and twenty years later when she is living in England, Maddox will again become a part of her life when he looks her up at her place of employment.
Jeanie's life at this point is a complete disaster. She is a promiscuous alcoholic who has been carrying on an extended affair with a married man. She struggles to come to terms with the events of her life and with not knowing what happened to her father. When Maddox reenters her life, he tells her that he knows where her father is and can take her there.
Okay, this is all very sad and depressing and since I found Jeanie to be quite an unlikeable character, it was really hard for me to get into the story. While it was an interesting plot, because I found it difficult to care about the main character I didn't like the book as much as I had expected I would.
Moreover, I was tempted to make this my first two-star review of the year, but in the end, decided to be generous and bumped it up to three. It was, after all is said and done, a well-written tale. It just wasn't one that I could especially enjoy.
2023 3-star reads 2023 books Tyrell Johnson