Carrie Soto is Back by Taylor Jenkins Reid: A review 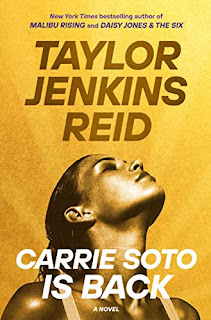 Carrie Soto was not a particularly likable character. Single-minded and driven, her one focus in life from the age of two had been tennis. It was at that age that her father, Javier, began training her to be a tennis champion. He, himself, had been a professional tennis player and he was determined that he would make his daughter the best that the world had ever seen.
He succeeded almost beyond his dreams. Carrie had a storied career in which she shattered all records. She earned twenty Grand Slam titles and had every right to rest on those laurels. But then at the age of thirty-seven, six years after her retirement, she watches as a young player named Nicki Chan is on the verge of taking her record from her. Carrie cannot bear it! She makes the unprecedented decision to come out of retirement and try to reclaim her record, once again coached by her father.
Carrie really has nothing in her life besides tennis. She has no friends beyond her father and her devoted agent, Gwen. Other than tennis, "love" for her has only meant a series of one-night stands. She's never had a serious romantic relationship with a man, or, for that matter, with a woman.
Bowe Huntley is one of the men with whom she has a past. He, too, is now a struggling tennis player trying to hang onto the sport after finally getting sober and going through various personal trials in his life. Bowe is being trained by Javier and Carrie, reluctantly, agrees to train with him. She will not become friends with him but they will work together to be the best at the sport that has consumed their life.
Well, of course, you must realize where this is headed. Carrie and Bowie do become friends and much more than that and Carrie learns that perhaps there is more to life than tennis and perhaps she can find happiness and fulfillment in other places than on a tennis court.
In reading reviews of this book, I was reminded that Carrie actually made an appearance in another of Reid's books, Malibu Rising, which also happens to be on my "to-read" list. (For some reason, I thought I had already read it, but when I looked at the link, I realized I hadn't.) Carrie is a terrific - if unlikeable - character and I can understand why Reid would return to her. Over the course of this book, she actually does become somewhat more sympathetic and likable, so will we see her again in future Reid books? I wouldn't bet against it.
2022 4-star reads 2022 books Taylor Jenkins Reid