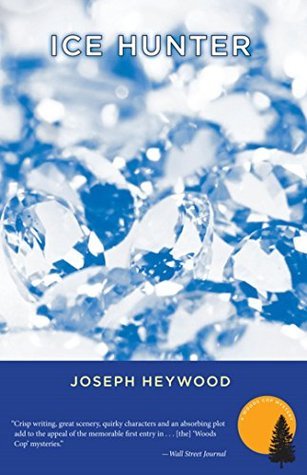 This is the first in Joseph Heywood's "Woods Cop" series of mysteries. The setting is Michigan's remote Upper Peninsula. It is a harsh and demanding terrain of vast wilderness and the people who choose to live there have their own codes and rituals. They are not particularly welcoming to outsiders or to the conservation officers whose duty it is to police the area.
One of those conservation officers is Grady Service. He is the protagonist of these mysteries. He is a former marine who served in the Vietnam War. I don't recall that the time frame of the action in this book was specifically identified, but the book was originally published in 2001, so we can assume (I think) that it is the late twentieth century. Grady is divorced. His ex-wife had accused him of having a death wish and told him she had no desire to be a widow. Now he lives a solitary life.
Grady is following in the footsteps of his father who was also a conservation officer working in the UP before he was killed. The area that he patrols is known as the "Mosquito Tract." It is well-named because mosquitoes are thick in the air.
Grady's life rocks along placidly enough. Then diamonds are discovered in the Mosquito Tract. But that's not all. Strange things are happening in the Tract. Fires are being ignited by an arsonist in what seems to amount to controlled burns in the area. Moreover, there is a helicopter observed repeatedly quartering the area in what looks like a search pattern. What's up with all that?
Someone makes it very clear to Grady that he should butt completely out of this whole situation. He should not investigate. He should just continue with his usual daily routines. But, of course, we know that isn't going to happen!
So, this book sets the stage for the series to follow and there is quite a bit of exposition and explanation of Grady's life and circumstances. He is a very likable character, one who is easy to identify with and to pull for. The reader wants him to succeed and be happy. He actually reminded me quite a bit of C.J. Box's Joe Pickett, a thoroughly decent man doing his best to uphold the law in an area where obedience to the law is not necessarily the common practice.
This was an easy and quick read. The storyline pulled me in and kept me turning the pages. I think I would like to get to know Grady better so I will be seeking other books in the series.
2022 3-star reads 2022 books Joseph Heywood